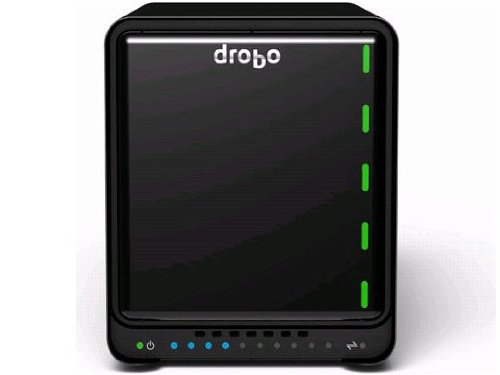 I upgraded my home storage to a Drobo 5N, in January 2014. Over two years later a disc failed, swapping in a new one was no big deal.

I have loved Drobo since my 1st generation unit. Much easier than packing a PC case with discs and fighting with whatever the most recent, trendy Linux distribution is, Drobo is a simple, fire and forget solution. Losing a disc on the original unit involved a slow time consuming restore, not so with the newer 5N.

A red light started to flash on my Drobo 5N. I didn't notice, but the monitor agent, Drobo Dashboard, did and popped a message up on my laptop. The Drobo archives all my digital photos, and a lot our home media. While everything was still available, my daughter was streaming movies off the unit, I wanted to replace the failed disc quickly.

Swapping the disc was as easy as advertised. Unlike a swap on the 1st gen unit, this one keeps functioning at normal speeds with one disc down. I simply popped the red lighted HDD out, and slid in a new one. A few seconds later the disc registered with a green light, and I was done.

I find Drobo a fantastic storage solution. Pack it full of discs, plug it in, configure it once and you are good for years. I just use it, and generally forget the physical disc is even in the house. I've heard the complaints about their proprietary file system, but the ease of use is such that I can overlook it.

Adventures in Drobo-land: upgrading to a Drobo 5N