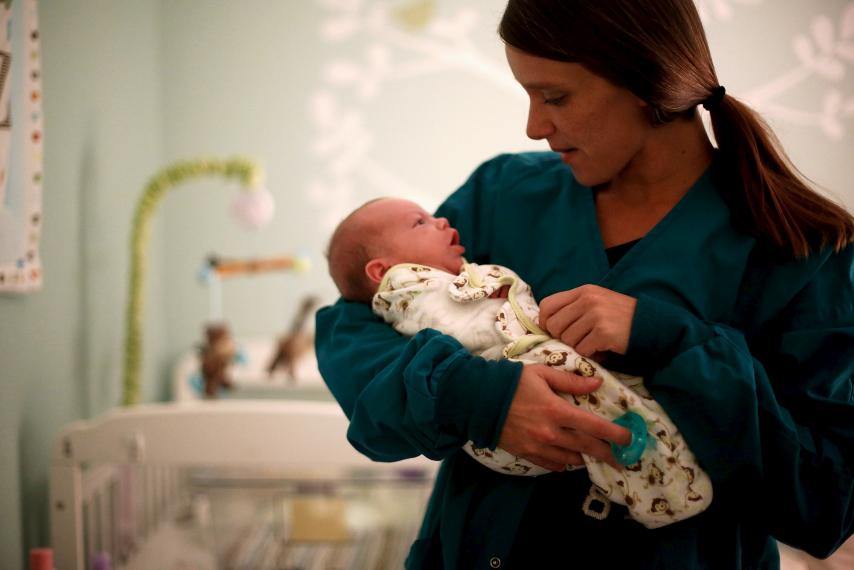 Lisa Collinsworth holds her infant son Luke during a visit with him at Lily’s Place, a treatment center for opioid-dependent newborns in Huntington, West Virginia, October 19, 2015. JONATHAN ERNST/REUTERS

The abuse of heroin and prescription drugs like Percocet and Oxycontin is on the rise, and with increasing dependency among adults, a growing number of children are essentially born opioid addicts. The care of these children requires resources far beyond the scope of addicted parents, and beyond the scope of our tattered mental health care system, gutted by decades of federal budget cuts.

A similar bill pending in the Senate is “one of more than a dozen new measures that are aimed at addressing a U.S. epidemic of addiction to pain pills and cheap heroin,” Reuters reports:

The legislation came in response to a Reuters investigation last year, titled "Helpless and Hooked," which revealed that at least 110 babies had died since 2010 after being born dependent or exposed to opioids and sent home with parents ill-prepared to care for them.

"It's hard to imagine that stories like these could be any more tragic," Rep. Lou Barletta, a Pennsylvania Republican who is the prime sponsor of the bill, said on the House floor. "Unfortunately, they are. Because they should have and in many cases could have been prevented."

Only nine of the 50 U.S. states followed a federal law requiring them to track and help those newborns, Reuters reported. The news agency found that more than 130,000 newborns were diagnosed with drug withdrawal over the last decade, but most of them weren't reported to state child-protection authorities.

A sign marks the entrance to the Neonatal Therapeutic Unit at Cabell Huntington Hospital, where staff members have acted to treat an alarming number of drug-dependent newborns, in Huntington, West Virginia, October 19, 2015. REUTERS/Jonathan Ernst

The Reuters investigation found 110 examples of children whose mothers used opioids during pregnancy and who later died preventable deaths after they were sent home from the hospital. A federal law meant to protect those children has largely been ignored by states across America.