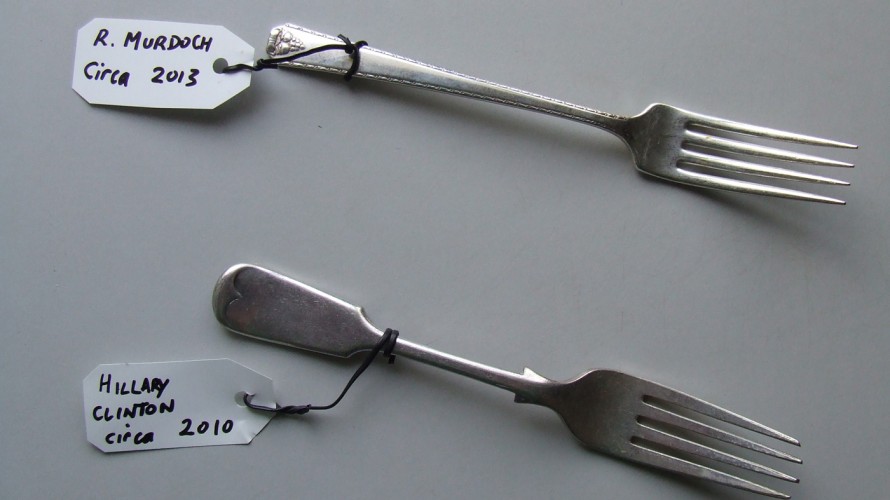 Australian artist Van Thanh Rudd, nephew of former Prime Minister Kevin Rudd, spent 15 years stealing forks that had been used by the rich and powerful, vacuum sealing them to preserve leftover morsels, saliva and DNA, and now he tours them as a gallery show called "Rich Forks."

A political activist and visual artist, he has been at the centre of a number of recent political controversies: three months before Julia Gillard ousted his uncle from government in 2010, Van had announced he would be running against her in the Melbourne seat of Lalor, for the Revolutionary Socialist Party. Later that year, when the ABC program Australian Story featured him in an episode, “Uncle Kevin” declined an invitation to appear; and in 2011 Van was fined and removed from the Australian Open after staging an anti-racism protest dressed in a Ku Klux Klan outfit.

But The Rich Forks has been Van’s most longstanding project and next week a small amount of them will be exhibited at a community arts centre in Melbourne before the collection travels the world. (Van would not confirm whether this collection includes a fork from his relative.)

Van says the idea behind the project is two-pronged: on the one hand it “takes back a tiny bit” of the wealth of the 1% and on the other it exposes and infiltrates exclusive corporate dinners “where billionaires and conservative politicians decide the future of our world while devouring premium food and wine”.