US Gov't survey: Half of Americans reluctant to shop online due to privacy & security fears 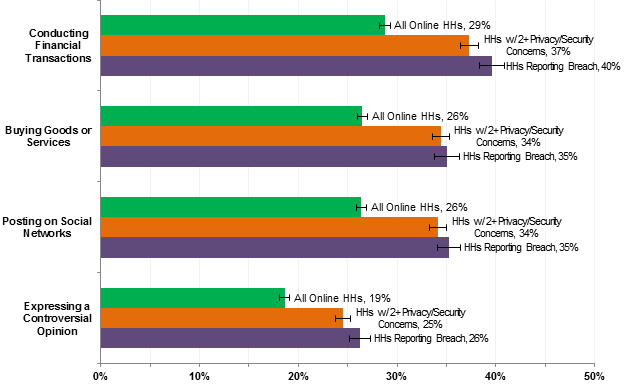 A study by the Department of Commerce's National Telecommunications and Information Administration found that half of American Internet users are "deterred" from engaging in online transactions because of fears over privacy and security breaches.

The report calls for improvements in security and cryptography (a controversial position, given the anti-cryptographic stance of America's surveillance and law enforcement agencies).

The survey's respondents cited the risk of identity theft as their main source of anxiety, followed by privacy concerns over data collection by online services and the US government.


In addition to a reluctance to shop online, the survey respondents indicated a chilling effect on their personal expression, especially when it came to expressing controversial opinions or participating in social networking.

The NTIA has a Request for Comment where it is inviting Internet users weigh in on "the potential benefits and challenges of these technologies and what role, if any, the U.S. Government should play in this area."

It is clear that many Americans have serious concerns about privacy and security on the Internet. NTIA’s most troubling finding comes from a series of questions about whether households had refrained from participating in certain online activities due to privacy or security concerns during the year prior to the survey. Forty-five percent of online households reported that these concerns stopped them from conducting financial transactions, buying goods or services, posting on social networks, or expressing opinions on controversial or political issues via the Internet, and 30 percent refrained from at least two of these activities. Privacy and security concerns deterred each of these important activities in millions of households, and this chill on discourse and economic activity was even more common among online households that either had experienced an online security breach or expressed two or more major concerns about privacy and security risks (see Figure 3).

Request for Comments on the Benefits, Challenges, and Potential Roles for the Government in Fostering the Advancement of the Internet of Things
[NTIA]