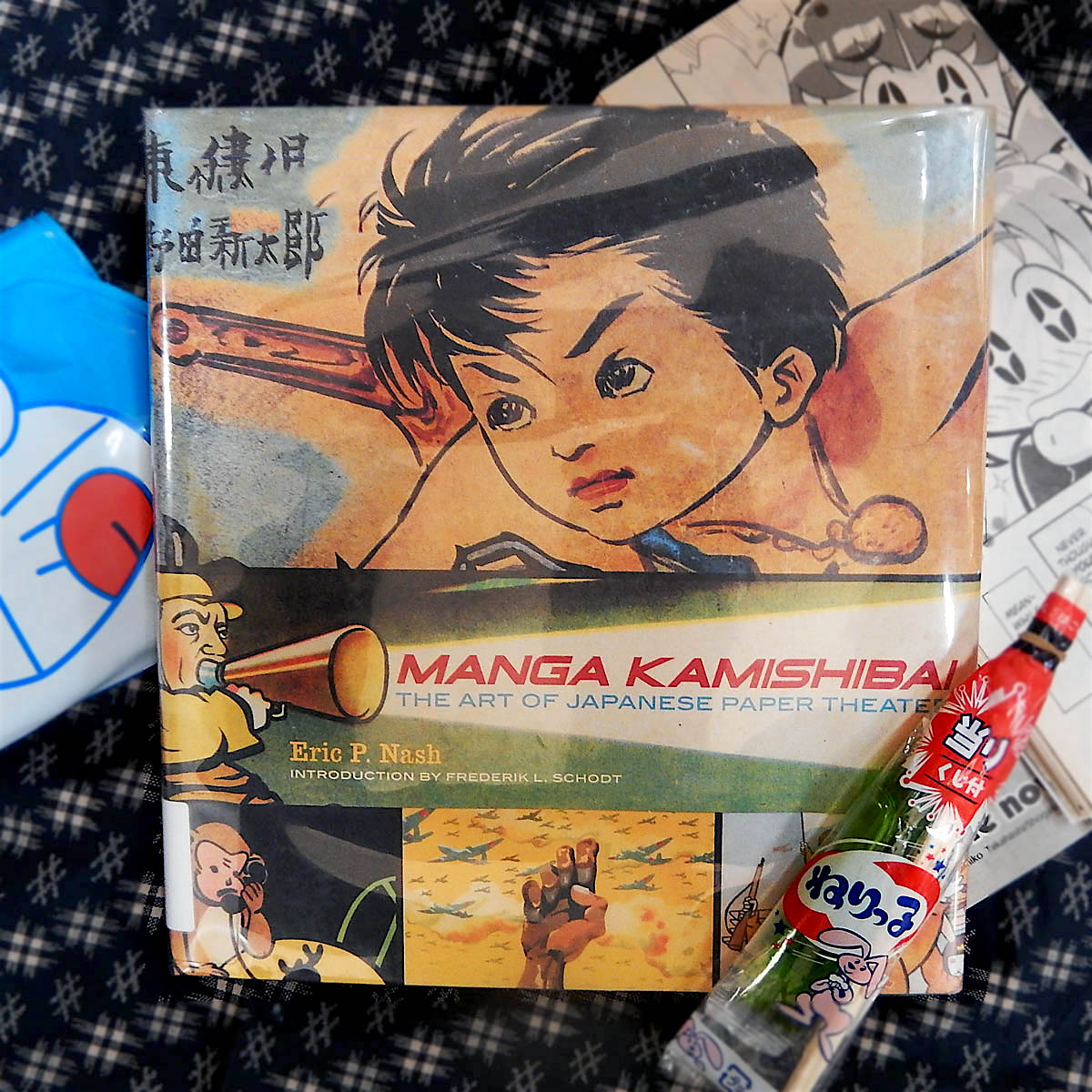 Manga Kamishibai tells and shows the fascinating history of Japanese paper theater, a lost storytelling form and the link between Edo-era Japanese ukiyo-e prints and modern day manga and television. I say "and shows" because this art form combined the spoken word with compelling visuals in uniquely Japanese storytelling performances and this book is rich with many wonderful reproductions of the hand-painted artwork.

Picture this: In devastated post-WWII Tokyo, a man stops his bicycle on a street corner. On the back of his bike is mounted a large, sixty-pound wooden box. The man flips a few panels around to reveal a stage-like picture frame. He noisily clacks together two wooden sticks, hiyogoshi, to call the neighborhood children. As they gather to see and hear the free show, the man sells them home-made penny candies, including a not-too-sweet taffy that's pulled and stretched using a chopstick (like today's movie business, the real money is in the profitable concessions!). The paying customers get a front row seat to the performance. The man slides a sequence of large, colorful panels in the frame "screen" as he tells adventure stories, quizzes the audience, and weaves tales of suspense, all with character voices and sound effects. As the story ends on a dramatic, to-be-continued cliff-hanger, the man packs up his two-wheel theater and pedals away … until next time. They are all but vanished now, but these performances date back to the 1930s when 2,500 kamishibaiya in Tokyo alone entertained 1 million kids a day.

Any fan of manga, anime, as well as comics in general will devour this book. The reproductions of the lurid images of action heroes, monsters, villains, and damsels in distress in the stories embody a potent mix of influences: Japanese ink brush work, movie posters, silent film and cinematic design, and plenty of Western references. The army of artists that painted these panels freely borrowed from many genres, from Betty Boop to folk tales. In turn, kamishibai set the stage for the manga and anime that took its place (many of the same artists moved along with them). As the advent of television made these live street performances obsolete (television was first called denki kamishibai, or "electric paper theater"), the artists lifted from popular TV shows for their dying art form. Holy copy-cat, Batman!

You'll enjoy the witty captions, wide–ranging historical references and the clever writing style. This book also shows and tells how kamishibai was used to disseminate news, spread propaganda, illustrate war survival techniques, and fight prejudices. In a parallel to the congressional hearings and criticism by Wertham of the U.S. comic makers, kamishibai also was investigated and regulated. You'll read (and see) other interesting facts, like the technological and historical reason why comics have always been an important media form in Japan. (Hint: what if your language doesn't suit itself to using Gutenberg's movable type?). Manga Kamishibai is a real treat for any fan of Japanese pop culture (candy not included).