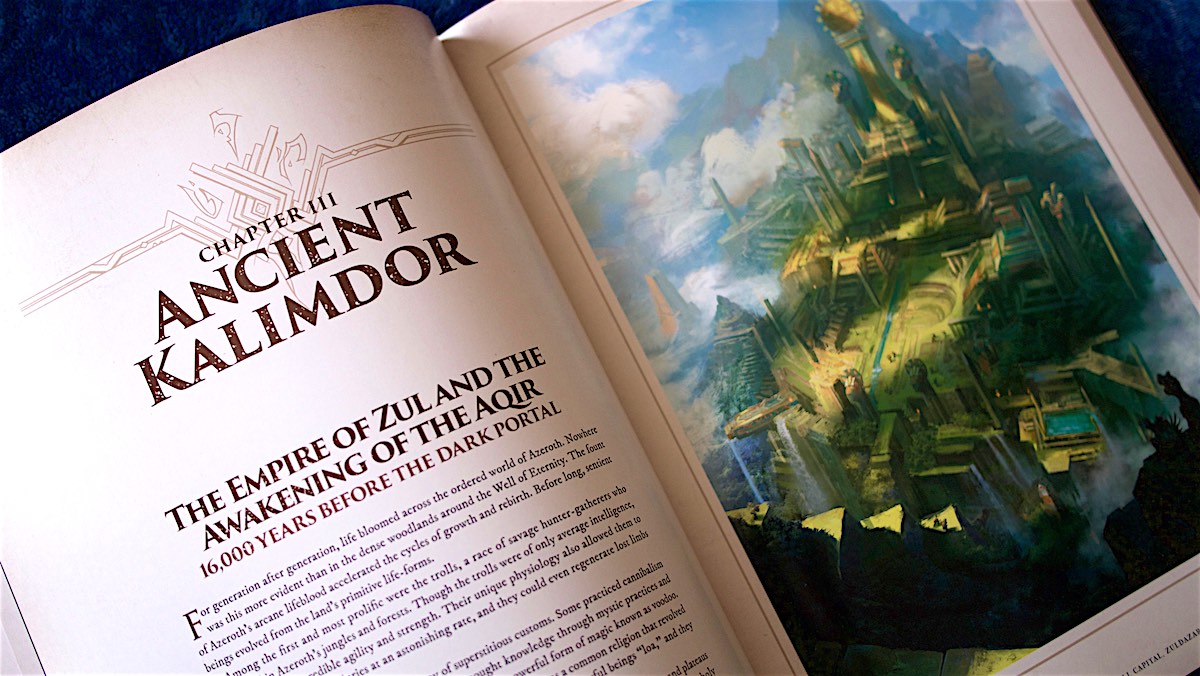 Real chronicles for imaginary places are nothing new. I'm pretty sure my first one detailed all the secrets of Krynn. But it might have been Pern. Or maybe Thra. It's hard to remember. And these days, the market boasts a surfeit of atlases, histories, dictionaries, and art books big enough to satisfy even the most die-hard fan.

Dark Horse's World of Warcraft Chronicle Vol. 1 fills all these roles beautifully. Formatted as a history (hence "chronicle") the book takes the reader from the very beginning of the WoW universe to a time 45 years before the Dark Portal, when a young boy named Medivh awoke from a long coma...

WoW is famously lore-dense. It is one of the most captivating things about the game for many players. Each new expansion brings new races, new characters - each with their own complete story - as well as new back stories for old favorites. And then, too, WoW has a nifty habit of either adding new locations (and new stories!) or completely destroying the old lands and kingdoms and rebuilding in the same spots for, you guessed it, new stories!

This book is an attempt to corral all those stories into something coherent and readable. Two things help the book achieve its goal: the history is laid out chronologically (chronicle!) and supported by numerous maps and stunning artwork. The maps show the same locations again and again, noting how things have changed since the last time they were presented. And the art...Blizzard's own Peter Lee illustrated Chronicle with lush paintings that depict key scenes instantly familiar to anyone who has spent time in World of Warcraft.

As a physical object, Chronicle is another in a long line of beautifully constructed books from Dark Horse. The covers are sturdy (and sans jacket, instead having fixed illustrated panels on the front cover) and the paper is heavy enough to survive being leafed through repeatedly without tearing. Likewise, though glossy, the paper resists being smudged or marked by skin oil. The font and typesetting is clear and easy to read. As I said, it is a beautiful book.

With the (hopefully first of many) Warcraft movie set to debut this summer, World of Warcraft, the game, is sure to gain a bunch of new fans as well as see the return of lapsed players like yours truly. This book is the perfect companion piece for those new to Azeroth and those whose recollection may have faltered a little and even those who are already experts because, if nothing else, this book will make you want to take up your sword, climb on your mount, and join the battle.

For the Horde! (Alliance!)

13 years ago, World of Warcraft was embroiled in a scandal when company management backed up a moderator who punished a player for advertising an LGBTQ-friendly guild, who argued that advertising the fact that you're queer violated the game's hate speech laws by provoking homophobes to send hateful messages to group members.

From Reuters: “Actress Jamie Lee Curtis staggered people attending the global premiere of ‘Warcraft’ by turning up dressed as an ‘Orc shaman’ and talking about Hillary Clinton.”