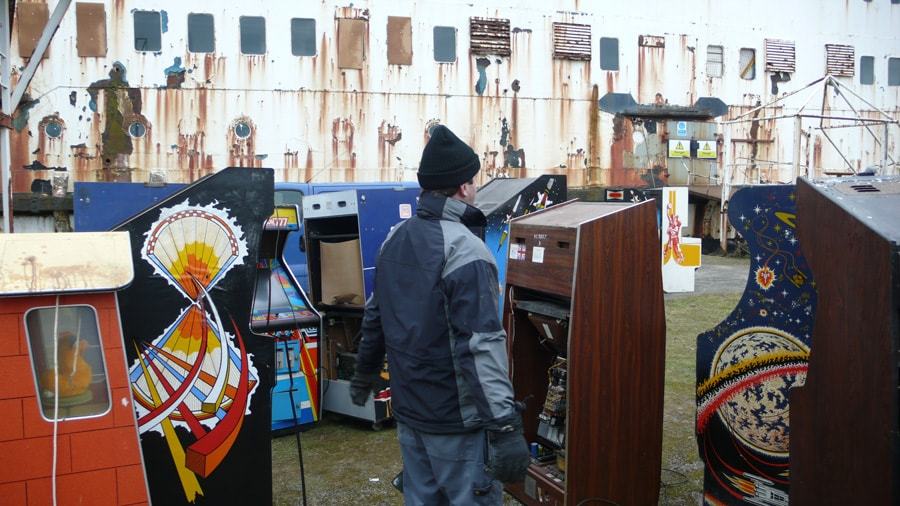 In 1979, the Duke of Lancaster -- a cruise liner turned car ferry -- was retired from service and moored at Llanerch-y-Mor, North Wales, where it was made over as a "Fun Ship," whose car-deck was refitted as a coin-op arcade.

It wasn't to last. After legal battles with the local council, the ship was shuttered in 1983, and floated there, forgotten and derelict, for 30 years.

In 2009, urban exploration enthusiasts broke into the ship and released photos of the arcade, which still had 50+ rare games, gathering dust and dangerously close to water. Oliver Moazzezi, a member of the UK Video Arcade Collectors forum, spent two years trying to figure out who owned the ship, and finally made contact with a family member in 2011, who offered to sell the cabinets.

After months of haggling and several false starts, they agreed on a price, and the seller informed Moazzezi that he had 10 days get the games off the ship, as renovations were about to begin, also: "you'll need a crane."

Moazzezi and the UKVAC forum members raised the money to hire a crane and transport, and rescued the games in 2012. The games are now distributed among collections across Europe, undergoing painstaking restoration.

The only way the arcade machines could be removed from the ship was via the outer deck, and given the height of that, a full sized crane would have to be used. What was supposed to be an easy, smash and grab affair, was turning into a logistical nightmare. But the buyers were made of steely British determination, and the hunt was on for a crane, and a bunch of willing buyers with vans!

A herculean effort was required to organise multiple collectors to commit to cabinets, gather payment, rent vans (and a crane!) and project manage everything to get to the ship on the agreed date of February 4th 2012. Around 15 collectors and enthusiasts came from all over Europe to descend on this small town in North West Wales...

So the net result was that one by one, over 50 classic arcade machines were saved, and the team pulled off what is considered the most audacious arcade raid ever carried out here in the UK. These cabs are now in the safe hands of collectors across Europe and are in the process of being repaired and restored. And this is the essence of the hobby – finding, rescuing and restoring these early games.