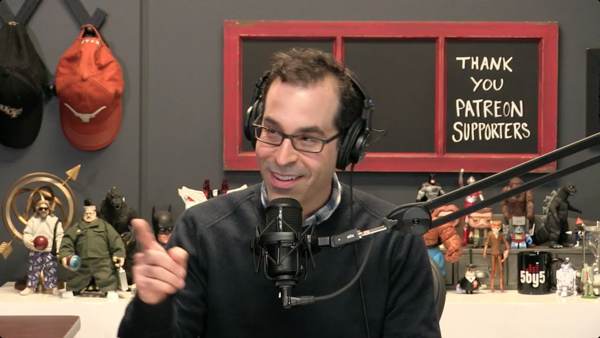 Dan Benjamin is a podcaster, writer, software developer, and ex-corporate stooge. He is the founder of 5by5, a podcast network where he hosts a handful of shows. He is the author of baconmethod.com and hivelogic.com, and has written for A List Apart and O’Reilly. Dan lives in Austin, Texas with his wife and their children.

"This could be called an architect's pencil or a draftsman's pencil or a lead holder is the name that I've always used for it. ... What's nice about it is it's lightweight ... but it's got that nice metal grippiness to it. ... Instead of being like a regular mechanical pencil where you click the end of it and it advances the lead millimeter by millimeter out, this thing you can control. When you press down the button end of it, as much lead as you would like to slide out can slide out. ... A supplemental item is the Mars Rotary Action Lead Pointer and Tub, which allows you to put the lead holder in there. It presets how much of a point you want based on these two little holes that you adjust it to, and then you spin it. ... I encourage people to write and draw with a pencil. It's the most fun thing in the world."

"This is my microphone of choice these days. I have used so many different microphones over the years. I started podcasting back in 2006. ... I care a lot about the microphone. ... This was maybe the fifth or sixth microphone that I'd tried. When I try one, I tend to try to use it for several months. This one I've been using now for about a year, and I just love it. It really meets with my voice I think really well. What's nice about it is it was originally designed as a kick drum mic. If you were mic'ing up a drum set, you would put this microphone in front of or even inside of the kick drum. As weird as that may sound, some of the most widely used microphones for voice in broadcasting actually were originally designed or designed in part to also be kick drum kind of a mic or a mic for a drum."

"First of all, I have to tell you how I came to have a blender that is this absurdly expensive in my possession ... I started getting into the idea of making smoothies in the morning for breakfast ... and I said to my wife, 'I think I want to try making them at home.' She says, 'Well, you know we have a blender that could do that.' I said, 'You mean like the one we got when we got married, like a million years ago?' She's like, 'No. We have a really nice blender. It's a professional level Vitamix blender.' I'm like, 'Where is it?' She's like, 'It's in the box in the garage.' I'm like, 'Why is it out there?' She's like, 'It was so expensive that I was going to return it. I just bought it not long ago and I felt like there's no sane reason I should have spent this much money on a blender.' ... I said, 'All right, let me try it.' I tried it and the smoothie that I made — the world stopped and everything went dark and a spotlight went down on the smoothie. It was the best thing in the world. I was full. I was full all day. I had energy. I lifted a car off of a fire hydrant in the garage. It was amazing what I was able to do. I said, 'Don't you dare return. I'm keeping this thing.' She's like, 'All right. We can keep it.' A week later I've been making smoothies all week long. It's been the most amazing thing. ... Anything blends in this."

"I got this desk is because years ago I started dealing with chronic lower back issues ... As a result of that, my doctor said, "One thing you should really consider doing is instead of spending most of the day sitting, you could spend a significant part of the day standing," but you still want to sit. .... I went with Steelcase because at the time that I got it that was the desk that you get. Now there are lots of other alternatives for sit-stand desks, but I still really like the Steelcase one, because it's just made so rock-solid. The motors in it are super, super solid and strong. You can have your big, fancy monitors up on top of it. In my case I even have a rack with a whole bunch of audio gear on top of it and a screen. It lifts us up and down, no problem."