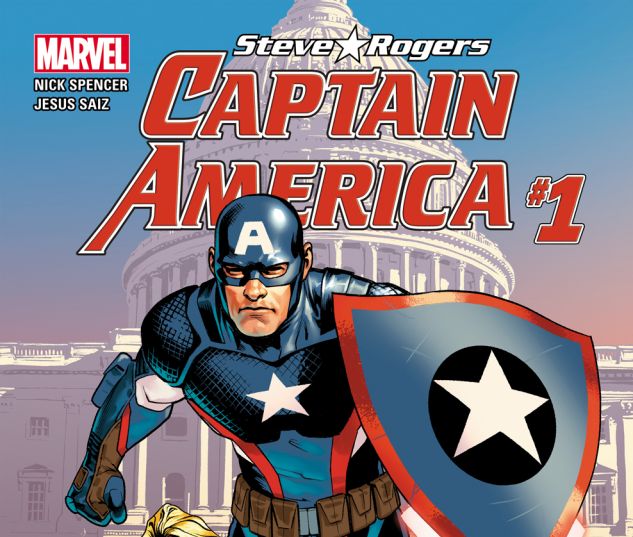 This week, Marvel Comics published the first issue of Captain America: Steve Rogers in which it's revealed that since his earliest days, Captain America has been a double agent for Hydra, the thinly veiled allegory for the Nazis; in an epic Twitter rant, Livejournal alumnus and Dreamwidth cofounder Denise Paolucci explains the way that perpetual copyright and business concentration has neutralized the ancient custom of collective storytelling of epic narratives, magnifying the harm from bad corporate decisions.

No one can say exactly why the writers chose to make such a radical shift in the story, though many hypothesize that it was for shock value, as a way of attracting attention to the new comic.

But it is a radical departure indeed, one that has especial significance in an era in which neofascist movements are rising, and when a cryptofascist is the presumptive nominee for one of the national US parties. On top of that, the character of Captain America was created by two Jewish writers at a time when the US hadn't decided whether to involve itself in the European war against fascists, as a way of showcasing an American ideal that opposed Naziism.

Paolucci argues that epic, mythic stories have an important role in human culture, and that they have always mutated through this kind of retelling and reinterpretation. The difference now is that a small number of corporations own most of our modern myths, and have the legal right to suppress all the retellings except their official canon.

She makes this an argument for fan-fiction as part of this mythic retelling. I think she's right: and the courts agree. Important appeals court rulings on copyright, like the one over The Wind Done Gone, have specifically held that fan-fiction that retells a story in order to comment on the canon and the ways that its owners have directed it are fair use.

#CaptainAmerica, like many comic superheroes, is a contemporary heroic epic that for decades has spoken to our best ideals.

When Cap is done right, he reminds us that individual action supports the collective good & of how individuals uphold societies.

That speaks to people! We all see the best parts of ourselves in Cap, and we identify with the message -- especially today.

Like Homer reminded the ancient Greeks of their societal ideals, like Virgil reminded the Romans of theirs, Cap reminds Americans of ours.

Homer & Virgil grew into that role, though. Stories expanded as people retold them & the best parts lived -- the parts that spoke to people.

People retold the epics in hundreds of ways and the versions that survived converged on the message that resonated most.

Contemporary heroic epics can't do that anymore. They're owned by a single rightsholder who has sole control over the story.

That single point of failure bottlenecks the natural evolution of the heroic epic down to what the 'owner' wants to do with it.

A single owner can never replicate the diversity of story that happens in an oral tradition. We get one version of the story, not many.

And the story is vulnerable to the owner deciding to drag it in a different direction because they don't understand what parts resonate.

In a healthy collaborative tradition, those massive tone-shift stories would happen, but they'd just be one version alongside all the others

And some people would like that version, and they could have it, but the other versions would still be circulating, and people could choose.

Today, the power of the law invests that 'canonical' version with authority: the only people who can legally tell Cap stories told this one.

People are upset because a heroic epic they were invested in took a sharp shift, violated the storytelling contract, & betrayed its ideals.

Sure, it's going to get undone -- it's comics! -- but people get PISSED when a storyteller violates the implied contract with the reader.