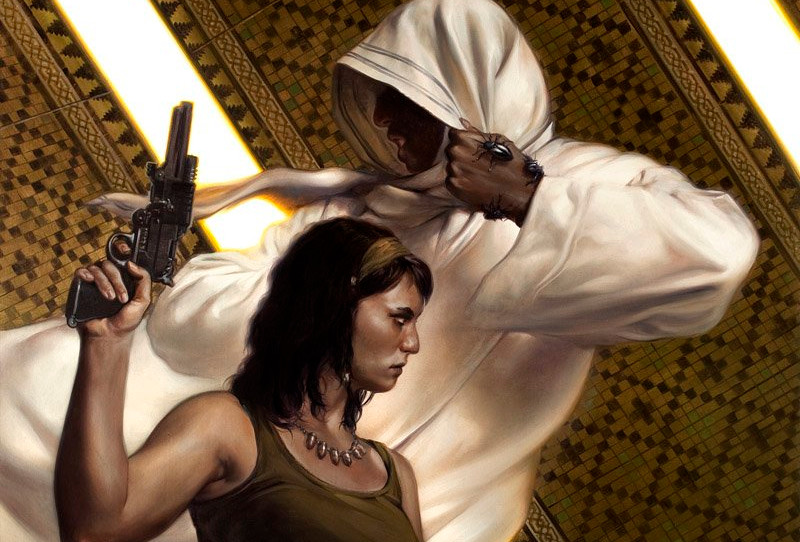 Kameron Hurley is first and foremost a talented novelist (see, for example, her critically acclaimed God's War books), but her first Hugo was awarded for an essay, "We Have Always Fought," which is just one of many significant, eloquent, and insightful nonfiction pieces collected in The Geek Feminist Revolution, just published in paperback.

Like her fiction, Hurley's essays draw on her own history, growing up in a sheltered, working class white suburb; a disastrous relationship with an emotionally abusive boyfriend; a failed bid to move out at 18 and then a more successful migration to Alaska at 19; a near-death experience when her lack of medical insurance left her late-onset Type 1 diabetes untreated; her medical debt; her queer identity; her graduate research on woman revolutionaries in South Africa; her grandmother's experiences in Nazi-occupied France; and her day job as a successful marketing writer and her struggles with depression and her political awakening through science fiction.

An occupational hazard of this sort of collection -- collecting the author's columns and essays for diverse publications -- is a certain amount of repetition. The essays are written to stand on their own, and so they recapitulate bits of the same background. It's unavoidable (and universal -- my own essay collections suffer from this, too), but it's not too intrusive, and is really the only complaint I have about this collection.

Because otherwise, it's excellent. Though the collection is divided into thematic sections (Level Up; Geek; Let's Get Personal; and Revolution), the overarching themes are of understanding the role of culture in exploring and addressing social injustice. Sometimes, Hurley explains the notion of "privilege" with crisp, critical language that acknowledges the shortcomings of using "privilege" as a shorthand without minimizing its importance. Other times, she's writing hot takes on some of pop culture's ugliest moments -- Gamergate, Sad Puppies, etc -- and manages the nearly impossible: a hot take that stands up in hindsight, capturing truths that endure past the scandal's brief flash.

Whether offering advice to up and coming writers; or reflecting on how to remain professional in the face of abusive harassment campaigns; or explaining how her own thinking was changed by science fiction; or talking about the foundational injustice of economic inequality in a nation without universal healthcare, Hurley is cogent and measured, wielding her anger like a scalpel rather than a cudgel, deploying a rage that is as tactically sound as it is genuine.