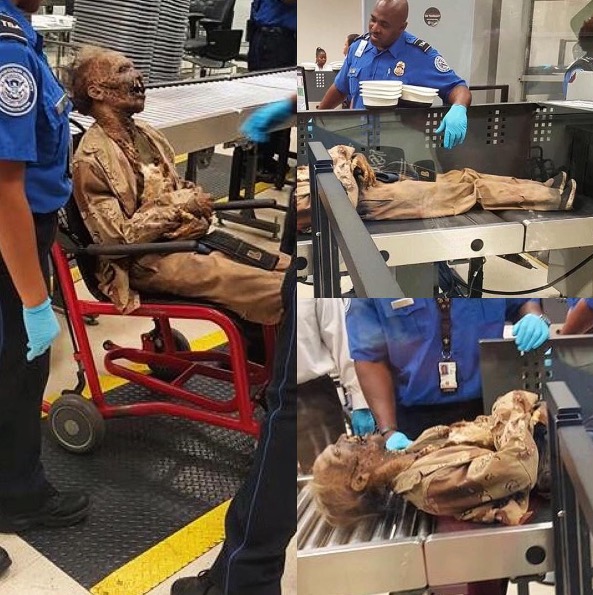 The TSA Instagram account is such a trove of high weirdness that I am now thinking of the TSA as a publicly-funded arts organization that I contribute to with taxes and time spent in line as it scans travelers for items to add to this gallery.

An oversized bottle of liquor was detected in a carry-on bag at Detroit (DTW). Not only was the large bottle of liquor prohibited, but so were the five dead endangered seahorses that were inside the bottle. Michigan Fish and Game responded and confiscated the bottle.

#TBT - May 2014 - This mallet was discovered in a traveler’s carry-on property at the Burlington International Airport (BTV). Items such as sledgehammers and mallets are considered bludgeons and are prohibited from being packed in carry-on bags. Checked baggage is fine.

#TSATravelTips - Anything resembling a grenade is prohibited in both carry-on and checked baggage. Especially if it’s a grenade shaped grinder with marijuana inside. This grenade-shaped grinder was discovered in a carry-on bag at Sacramento International Airport (SMF).

#TSAGoodCatch This inert grenade was discovered in a carry-on bag at the Tampa International Airport (TPA). If an item looks like a real bomb, grenade, mine, etc., it is prohibited. When these items are found at a checkpoint or in checked baggage, they can cause significant delays because the explosives detection professionals must respond to resolve the alarm. Even if they are novelty items, you are prohibited from bringing them on board the aircraft.

#TSATravelTips - Marijuana was discovered concealed in a jar of peanut butter in a checked bag at San Jose (SJC). As we’ve said before, we’re not looking for illegal narcotics, but we have to report them to law enforcement when discovered. #TSAGoodCatch

Talk about deadheading... This crusty ol' chap is actually a prop from the #TexasChainsawMassacre movie. He was brought through a checkpoint at the Atlanta (#ATL) International Airport, where as you can see, he was screened and sent on his jolly way. #TSAOnTheJob

#TBT April, 2012 - This IED training aid with a block of simulated SEMTEX-H, and a simulated blasting cap was discovered in a traveler’s checked bag at the Columbus Metropolitan Airport (GSG) in Georgia. #TSAGoodCatch

#TBT August 2011 -- Two birds were discovered during a pat-down that was being administered due to bulky clothing at the Los Angeles International Airport (LAX). They were wrapped in socks and taped to the leg and chest of a woman who was traveling to China. @USFWS officers arrested the woman on suspicion of smuggling and exporting an endangered species out of the United States. #TSAGoodCatch

How I learned to love the TSA / picks / tsa