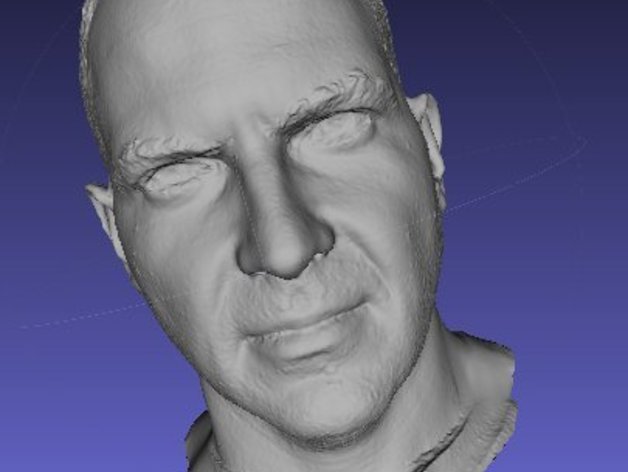 Something that baffles laypeople about copyright is what is, and is not, copyrightable; US law and international treaties protect the creative part of copyright, but not the labor part of copyright: merely working hard ("the sweat of the brow") on something isn't enough to give rise to a new copyright, but even a trivial amount of creative work is. So copying out the phone book gives you no copyright, even if it takes you all year, doesn't make it copyrightable. But writing a single haiku does.

Using scanners to faithfully reproduce objects from the real world as 3D scans takes skill and work, but if your goal is to make something as accurate as possible, with as little interpretation or variation as possible, then you're not making a new creative work.

Michael Weinberg, who's written some of the seminal legal papers on copyright and 3D printing (1, 2), takes up the question of copyrightability and scanning in a new white-paper for Shapeways, where he's now staff counsel.

As you'd expect, it's cogent and easy to understand, and an essential guide to a live issue.

One key to distinguishing between representational and expressive scans is to look for
substantial variation, both from the object being scanned and the resulting file, and between
scans produced by different scanners. By definition, representational scans are designed
to reproduce the scanned object as accurately as possible. That means that the scanners
strive to eliminate variation, and even two scans from different highly skilled scanners
should appear very much alike and very much like the object being scanned. Injecting
original, creative decision making into representational scanning undermines its primary
goals.27

Another way to approach this is to consider the breadth of choice available to the person
doing the scanning. There may be a number of decision points when the goal of a scan is
to digitally capture an entire object. However, when creating a representational scan those
decisions will be driven by the need to accurately capture the entire object digitally. A more
skilled scanner may be able to make better decisions than a less skilled scanner – but that
in and of itself does not make those decisions creative or original. In representational scans
all scanners are striving towards the same goal. As a result, such scans are not eligible for
copyright protection.

Scanning two-dimensional works operates under the same copyright principles. At its
least skilled and least original, using a photocopier to copy or scan a document requires
no originality or creative decision making. The few decisions that an operator might
make (which way to orient the paper, what resolution to scan at) are driven exclusively
by practical considerations related to the quality of scan or copy. Certainly a photocopier
or flatbed scanner can be used to make original and creative art – but for most people in
most cases, photocopiers and scanners are merely used to shift works from one medium to
another. The resulting copy is not eligible for additional copyright protection.

Even in cases where the process of scanning involved
a good deal more operator input than pushing a big
green button, courts have found that scanning for the
purpose of digitizing existing works does not create a
new copyright interest in the scan file. The process
of creating high resolution, high quality scans of great
paintings undoubtedly requires great technical skill.
However, a court concluded that it does not require the
type of original decision making that results in copyright
protection.28 Similarly, an attempt to claim copyright
protection for scans of vehicles failed because the goal
was to create as slavish a reproduction of the real-life
vehicles as possible.29

New Whitepaper on 3D Scanning and (the Lack of) Copyright