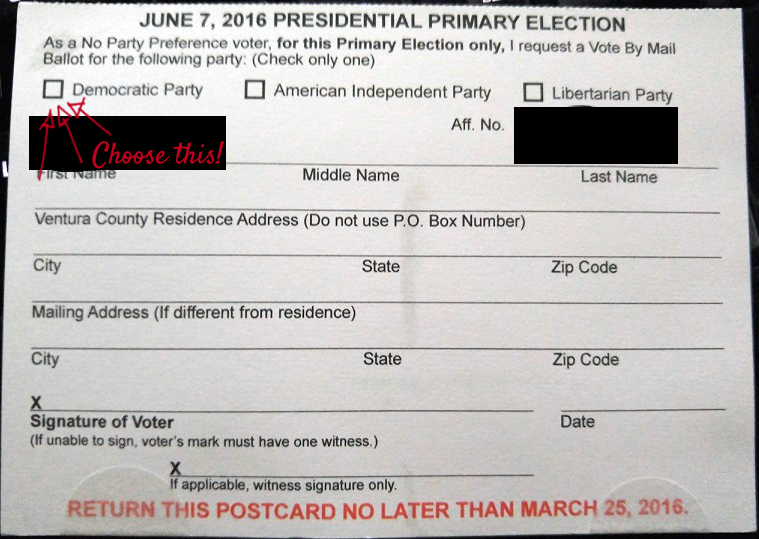 If you're a Californian registered Independent/No Party Preference, you are entitled to cast a ballot in the Democratic primary on June 7, but some Orange County poll workers report that they've been instructed to give independent voters "provisional ballots," which, in practice, are rarely if ever counted.

Palast: If you don’t know what a provisional ballot is, you are probably white. I call them placebo ballots. They were created by George Bush and Karl Rove after they swiped Florida in 2000. The Congressional Black Caucus was very upset that people were not able to vote because they were falsely removed from the voter rolls for all kinds of cockamamie reasons. So they said, “If your name is not on the voter rolls, you should still be able to vote provisionally. They can check your records and count your vote later so you don’t lose your vote.” They passed the provisional ballots through the Help America Vote Act. You can imagine, Dennis, what happens when George Bush says he’s going to help us vote. People won the right to a provisional ballot, but we didn’t win the right to have them counted. They rarely are. That’s why I call them placebo ballots. They say you can’t vote here, but you can fill out a provisional ballot. You think if you filled out a provisional ballot, sign it and stick it in the envelope, it’s counted. It isn’t. The chances they’ll count it are minimal. It’s like voting, but it’s not voting.

What does that have to do with California? I am currently reporting from Southern California, and there’s an Ashley Beck, who is a poll worker in conservative Orange County. She was being trained with other poll workers, and they were given some very strange information. In the California primary, the independent voters registered as NPP, or no party preference, can vote in the Democratic primary. They can ask for a ballot and they are allowed to vote. The Orange County poll workers were told if NPP voters ask for a Democratic Party ballot to vote for Bernie or Hillary, they are not to be given regular ballots, but provisional ballots. This shook up Ashley:

They are not being counted. Here’s the trick: Overwhelmingly, all polls show that NPP, or independent voters, are Bernie Sanders voters. Regular registered Democrats tend to slightly favor Hillary Clinton in the polls. So if you knock out the NPP voters by giving them placebo ballots – provisional ballots – that’s one way to steal the primary in California on June 7.