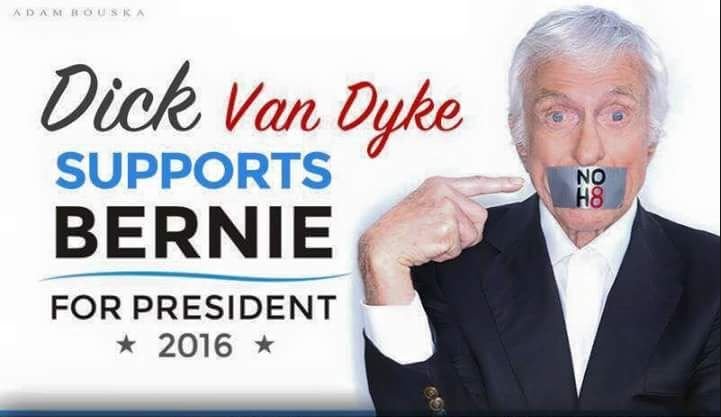 Dick Van Dyke, who recently celebrated his 90th birthday, has written an op-ed in the Hollywood Reporter endorsing Bernie Sanders as the best candidate for senior citizens.

Van Dyke, who recently appeared on Jesse Thorn's excellent Bullseye podcast to discuss Keep Moving: And Other Tips and Truths About Aging his bestselling guide to aging gracefully, describes Sanders as the politician most capable of resolving the "delicate balance" between "capitalism and democracy" which has become so distorted that "we're practically an oligarchy now."

He says that older voters may be scared off by the Sanders' "socialist label," but they needn't be, but explains that Sanders' brand of socialism is the same New Dealism that saved America from the Great Depression.

Bernie, whom I went to Reno to campaign for ahead of the Nevada caucuses and introduced at a rally in Santa Monica on May 23, gets called all sorts of names. "Socialist" is supposedly a bad one, but he isn't any more socialist than the New Deal that enabled America to emerge from the Great Depression and become the world's greatest superpower. The good news is that millennials aren't particularly worried about labels — they're focused on ideas, such as everyone paying their fair share in taxes, and that's why Bernie is doing so well with them. But older people often get frightened by labels, and I'm here to tell them they shouldn't. (I'm 90 years old, and I like to give young politicians like Bernie a hand up!) They're just words.