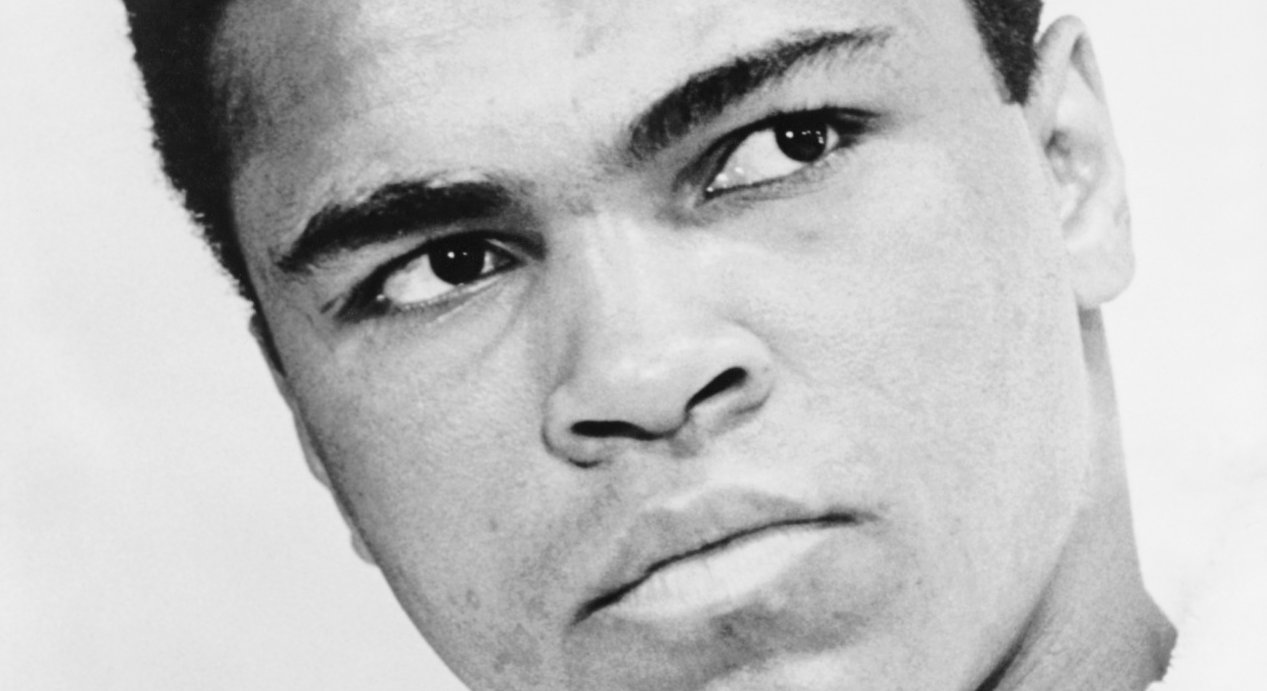 After the match, George gave him some advice. “You just gotta have a gimmick, polish your act,” he said. “Boxing, wrestling—it’s all a show. You gotta get the crowd to react.” He added, “You got your good looks, a great body, and you’ve got a good mouth on you. Talk about how pretty you are, tell ’em how great you are. And a lot of people will pay to see somebody shut your big mouth. So keep bragging, keep on sassing, and always be outrageous.” Though Gorgeous George didn’t explicitly say it, he was surely aware that millions of white Americans wanted to see this “uppity” black man have his piehole wired shut. This tension helped make Ali one of the most controversial and beloved figures of the 1960s.

At the beginning of Cassius Clay’s professional boxing career, he was primarily known for winning an Olympic gold medal and possessing a loud mouth. Most sportswriters hated him, especially the old guard, who felt he was not properly deferential. The racist treatment by boxing crowds and journalists certainly would have justified Clay’s decision to throw his Olympic medal into the Ohio River in disgust. It is one of the most memorable stories in sports history, but the truth is that Clay simply lost it. This fiction first appeared in his autobiography, The Greatest, which was a mix of fact and folklore ghostwritten by the Nation of Islam.

“The story about the Olympic medal wasn’t true, but we had to take it on faith,” said James Silberman, the editor and chief of Random House. “When he was young he took everything with a wink, even the facts of his life.” This tale resonated during the civil rights era because it conveyed a deeper truth about the indignities that African Americans suffered in America, the supposed “land of the free.” As cultural critic John Leland reminds us, “Tricksters tell small lies to reveal bigger ones.”

In early 1964, this fast-footed boxer shook up the world in spectacular fashion. Clay faced heavyweight champion Sonny Liston, a favorite of the white establishment because he didn’t rock the racial boat. Most everyone believed the champ would destroy this inexperienced upstart, and bookies set the odds seven to one against Clay. A New York Times editor even instructed the young sports writer Robert Lipsyte to map out the quickest route from the arena to the hospital. Liston was an imposing man, but that didn’t stop Clay from publicly mocking him: “Who would have thought / When they came to the fight / That they’d witness the launching / Of a human satellite? / Yes, the crowd did not dream / When they laid down their money / That they would see / A total eclipse of Sonny!”

When Liston arrived at Miami International Airport, his opponent was waiting for him on the tarmac, shouting, “Chump! Big ugly bear! I’m gonna whup you right now!” Liston fled the airport for a rented beach house, but Clay chased him in a car, hurling more insults until a fuming Liston pulled over. “Listen, you little punk,” Liston screamed. “I’ll punch you in the mouth. This has gone too far!” They were separated, but the staged drama resumed in front of Liston’s rental property, where Clay held court with reporters and fans in the front yard.

At the weigh-in on the morning of the fight, Clay became even more erratic. “Float like a butterfly! Sting like a bee!” he famously shouted, warming up his act. “Round eight to prove I’m great!” No one had ever seen this kind of behavior in the world of boxing, where anything less than stoicism gave off a whiff of panic and fear. Liston stood on the scales as his bug-eyed opponent kept flinging abuse. “Hey, sucker! You’re a chump! You been tricked, chump!” Clay ignored warning after warning until he was fined $2,500. “I suspected that there was a plan in his public clowning,”

Clay’s friend Malcolm X later said. “I suspected, and he confirmed to me, that he was doing everything possible to con and to ‘psyche’ Sonny Liston into coming into the ring angry, poorly trained, and overconfident, expecting another of his vaunted one-round knockouts.” The psychological warfare worked. Clay’s corner man, Ferdie Pacheco, said, “It convinced Liston to the end of his life that Ali was crazy.”

The moment the first-round bell rang, Clay launched himself into the ring and began circling—bouncing from foot to foot, head twitching from side to side. Liston lunged with a left jab, missed by two feet, and things went downhill from there. After six rounds, an exhausted Liston refused to fight anymore and forfeited the match. Cassius Clay then jumped on the ropes, leaned into the sportswriters sitting nearby, and taunted them. “Eat your words! Eat your words! . . . I am the greatest!” he shouted. “I shook up the world. I’m the prettiest thing that ever lived.” He also threw in a line that most people missed in the heat of the moment. “I talk to God every day,” he said, “the real God!”

Malcolm X, who laid low before the bout to avoid controversy, had now returned to his friend’s side. The next day, Clay announced that he had joined the Nation of Islam, whose leader, Elijah Muhammad, soon gave him a new name: Muhammad Ali. The boxer respected Martin Luther King, Jr., but was more compelled by Malcolm X’s fiery rhetoric and messages of self-reliance. Not surprisingly, this lost the boxer a large chunk of his white fans. They could tolerate Clay’s clownish behavior, but not Ali’s association with an imposing and inscrutable black nationalist group.

Like the other pop culture trickster figures, Muhammad Ali straddled the center and margins—remaking America’s social landscape in the process. He became even more politically outspoken after converting to Islam and was openly defiant when drafted into the military in 1966. If Ali had served, he almost certainly wouldn’t have seen conflict and instead would have been allowed to continue boxing as a representative of the U.S. Army. But Ali stuck with his principles and was exiled from the ring at the height of his career, while in his physical prime.

During this time, Ali uttered what became one of his most well-known lines: “I ain’t got no quarrel with them Viet Cong.” The antiwar and civil rights movements quickly turned it into the more dramatic “No Viet Cong ever called me Nigger.” The phrase was later appropriated by the Viet Cong themselves, who dropped propaganda leaflets stating, “black soldiers: no vietnamese ever called you nigger.” This game of telephone underscores how much of an influential global figure Muhammad Ali had become by the end of the 1960s. It also demonstrates how a single provocative or prankish statement can powerfully reframe a debate, especially when amplified through mass
media.

Excerpt from Pranksters: Making Mischief in the Modern World by Kembrew McLeod