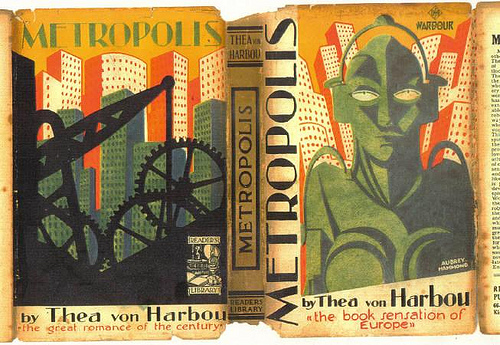 For nearly a decade, science fiction historian Joshua Glenn has waged a campaign to resurrect the "Radium Age" of science fiction: the period from 1904-1933 when writers turned their pens to "Air Battles, Antigravity, Interplanetary Voyages, Lost Worlds, Mad Scientists, Time Travel, and Utopias," before writers like Andre Norton and Arthur C Clarke and Isaac Asimov began their careers.

Glenn launched an indie press, Hilo Books, that reprinted ten of these classics, and he's just compiled a list of the 100 best stories from the Radium Age.

Annalee Newitz, who commissioned Glenn to write about the Radium Age for IO9 (we also ran some of his work!), profiles Glenn and his project for Ars Technica. Here's what Glenn has to say about the genre.

One thing that distinguishes Radium Age from Golden Age science fiction is its faith in the possibility of a post-scarcity, peaceful, tolerant, just social order. For excellent historical reasons, we became very cynical about utopianism after Stalin and Hitler; Golden Age writers prided themselves on being wised-up, compared to their naive predecessors.

But the Radium Age wasn’t naive: We find many warnings about dystopian tendencies in the cultural, political, and economic tendencies of the period: Karel Capek and Aldous Huxley worried about the drive towards efficiency in all things that characterized both America and the USSR; Yevgeny Zamyatin and Edgar Rice Burroughs worried about the effects of Soviet-style collectivism on the individual; and Jack London's “The Iron Heel” (1908), which is about fascist plutocrats who take over America, feels particularly relevant right now.

But we also find optimism that people can overcome their worst tendencies and build something wonderful together: Rudyard Kipling’s “With the Night Mail” and Hugo Gernsback’s “Ralph 124C 41+” are technocratic utopias, Alexander Bogdanov’s "Red Star” portrays a successful socialist society on Mars; Charlotte Perkins Gilman’s “Herland” portrays a successful socialist society without men. (The evolving role of women is a key theme and sub-theme in Radium Age science fiction, too.)

With the benefit of hindsight, we can find problems with these utopias, there’s no doubt about that. But they’re admirable efforts of the imagination, too. My takeaway: While remaining cautious about totalizing visions of social harmony, we shouldn’t conflate “idealistic” with “naive,” nor consider it the opposite of “wised-up.” Radium Age sci-fi is both wised-up and idealistic.

The 100 best stories from Radium Age sci-fi, which ruled the early 20th century