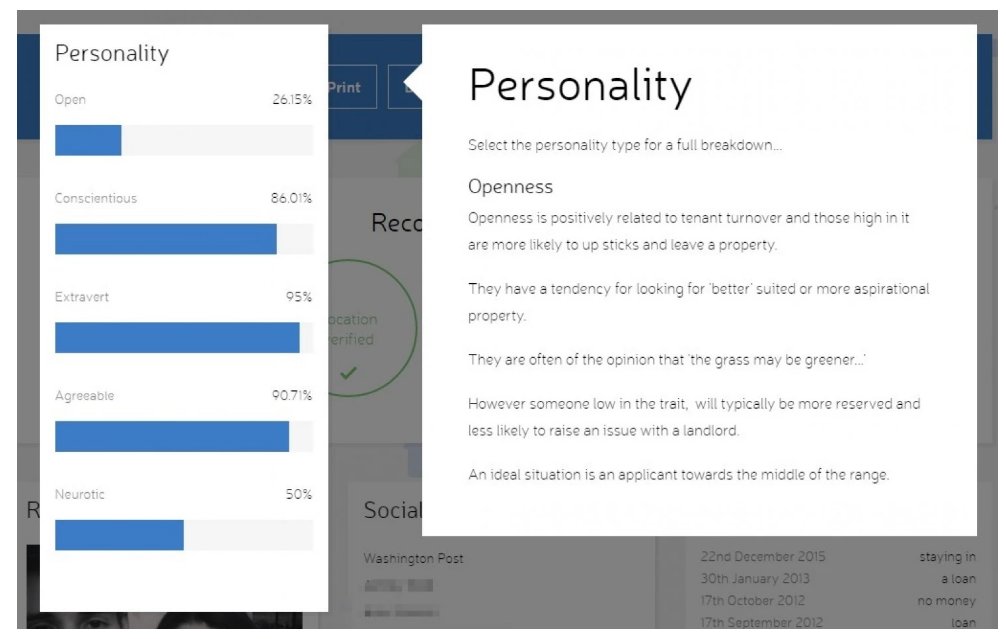 Here's Source Assured's pitch: landlords, if you write a requirement for tenants (and prospective tenants) to let us access their social media accounts into your lease/application process, we'll scrape all that data, use an unaccountable system to analyze it, and produce libelous, life-destroying dossiers on them that you can use to discriminate against people who seek shelter, the most fundamental human need after sustenance.

And this is the UK, where 40% of the national wealth is in the form of property in the southeast, where whole neighborhoods are being razed and replaced with high-rise safe-deposit boxes in the sky for offshore millionaires, where defined-benefits pensions are a laughable memory of the distant past, where the entire country is leveraged to the eyeballs to afford shelter, and where, consequently, even the tiniest, eensiest bobble in the value of property threatens the entire nation.

So this is the UK, where anything that can be done to shore up the housing market will be done: huge inheritance tax breaks for passing on houses, interest-free loans to "get on the housing ladder" (a phrase that is a kind of UK finance bubble Godwin's Law, indicating that rational discussion has ceased), and absolutely, positively no rights for tenants, because every right a tenant has is a right a landlord loses, and so every right for tenants knocks a couple p off the housing market's aggregate value.

Making tenancy unbearably awful has the additional benefit of encouraging people to do everything -- anything -- to become home-owners, in the same way that making coach seats on airplanes into torture chambers will get business people to inveigle, backstab and cajole their bosses into paying for business-class seats.

Tenant Assured, Source Assured's first product, is also available for the US market, of course, because the US market is just a couple years behind the UK market -- hi there NYC! Wave, LA! How're you doing, Seattle?

Don't worry, the Bond-villain co-founder of Source Assured, Steve Thornhill, has advice for people who sometimes post about going to bars, or parties, or their psychotherapists' offices, or HIV clinics, or prenatal care: "If you’re living a normal life then, frankly, you have nothing to worry about."

After he's done destroying renters' lives, he wants to market this to Airbnb hosts, people looking for dogsitters, helicopter parents... There's really no end in sight.

Make no mistake: The data will mislead. Among the behaviors that count against your Tenant Assured “credit” percentage — i.e., how confident the company is that you’ll pay rent — are “online retail social logins and frequency of social logins used for leisure activities.” In other words, Tenant Assured draws conclusions about your credit-worthiness based on things such as whether you post about shopping or going out on the weekends.

Thornhill’s response to these criticisms is that Tenant Assured asks permission before it does any analysis: In that way, he argues, it’s not much different from a background check or credit rating. Of course, we have consumer protection laws to regulate both those things, in large part because they have such an outsize impact on consumers. Regulators also have recognized that although such checks may technically be “opt in,” they’re effectively not optional for those who don’t have the luxury of only choosing landlords, jobs or loans that don’t require them, or who work in industries or live in areas where such checks are standard practice.