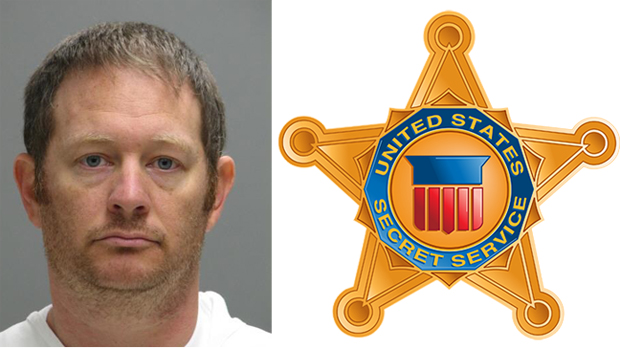 Moore, who is 37, has been locked up since November, and has pleaded not guilty.

Moore told investigators he had sexually explicit online communication with about 10 teenage girls. He confessed that his "absolute minimum" age for girls was 14 years old.

The communications for which he was charged were sent via two apps: Meet24 (on which you can "flirt, chat, and meet singles) and Kik (group messaging, like WhatsApp or Facebook Messenger, not specifically designed for hookups).

Former US Secret Service agent Lee Robert Moore, 37, was arrested on November 12, 2015 on suspicion of soliciting a minor for sex. (FACEBOOK)

The officer was posing as a 14-year-old girl on the Meet24 and the Kik chat apps, prosecutors said. Lee Robert Moore sent pictures of what appeared to be his penis, police said.

Authorities said they communicated with him for two months, while his second child was born and was experiencing a medical condition that required a significant surgery.

Moore "wanted to travel to Delaware and meet in person for sex," Detective Kevin McKay said, according to an affidavit.

The married 37-year-old U.S. Marine from Maryland lost his job. He remained in federal prison since late last year, records show. And more charges were coming his way on Thursday from Florida, as prosecutors said he sought to "sexually exploit multiple minor, teenage girls."