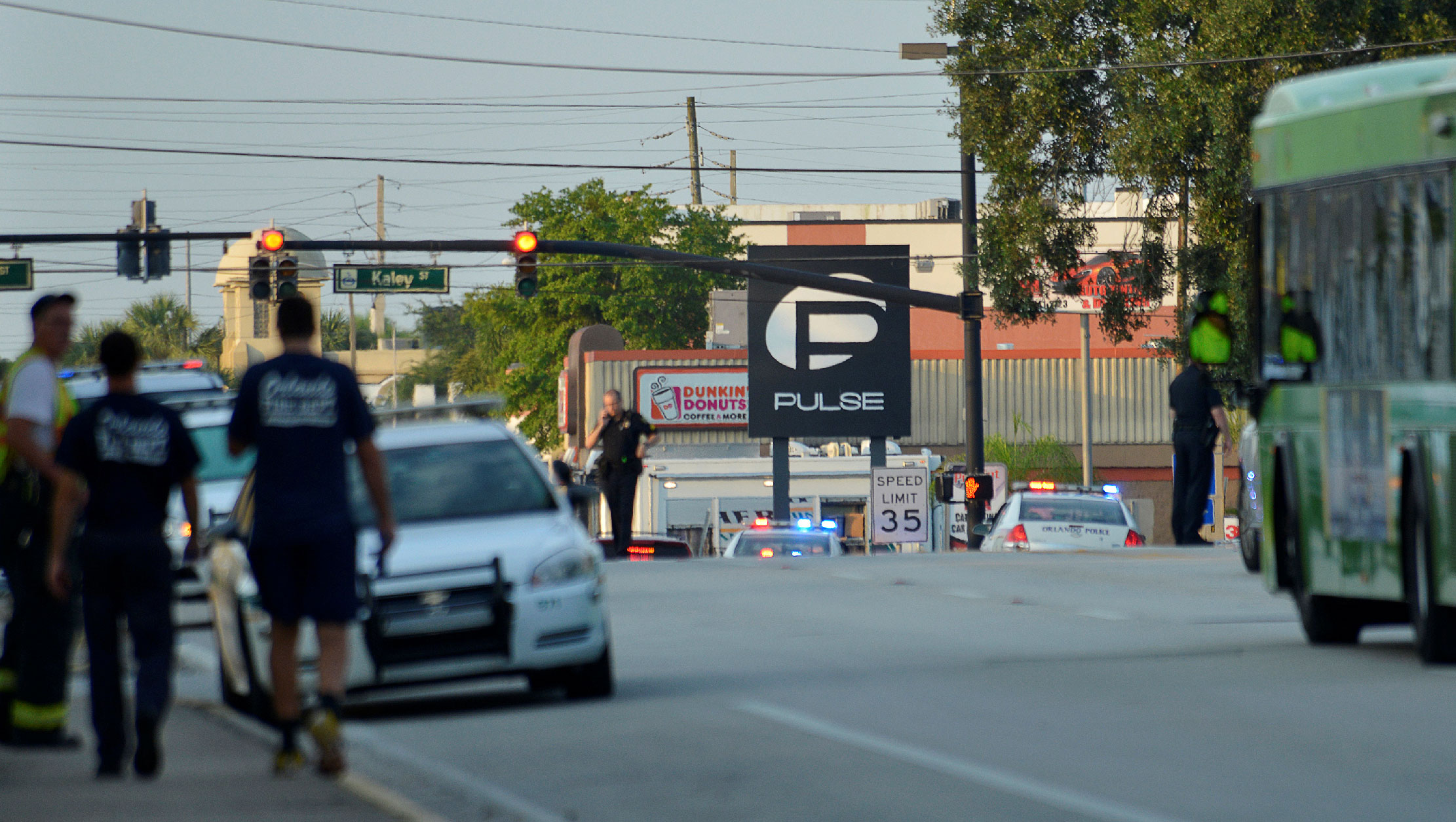 50 are reported dead and dozens injured after a gunman took hostages at Pulse, a gay nightclub in Orlando, Florida. Police killed him and described the massacre as an act of terrorism.

"Everyone get out and keep running," the club posted on its Facebook page during the attack, which began about 2 a.m. The BBC reports that desperate relatives gathered near the club after receiving texts and call from inside but nothing since.

. @ChiefJohnMina multiple people dead inside the club. Many casualties transported to hospitals. pic.twitter.com/0Lf69tClad

The shooter was named as Omar S. Mateen, a U.S. citizen from Port St. Lucie, Fla., reports WDBO, and the FBI are "leaning towards Islamic terrorism" as motive.

A clubber earlier described a situation of chaos outside as the number of casualties became apparent.

"There were just bodies everywhere," Christopher Hansen said. "In the parking lot, they were tagging them - red, yellow - so they knew who to help first and who not help first. Pants down, shirts cut off, they had to find the bullets. Just blood everywhere."

Some of the injured were reportedly brought to the Orlando Regional Medical Center in police pick-ups.

John Mina, Orlando's Police Chief, said the attack began when a police officer stationed at the club exchanged gunfire with the assailant, who managed to enter the club and initiate a hostage situation.

A SWAT team went in at about 5 a.m. to rescue the hostages and the suspect died in a shoot-out. He was said to be armed with an assault rifle and handguns , reports The Boston Herald.

He was "organized and well prepared" for the attack, reports WFTV, citing a city official.

An explosion reported at the scene was a controlled blast used to distract the gunman, police said. A bomb-disposal robot was sent in to inspect a vehicle, thought to be the killer's, parked by the nightclub.

In an interview with NBC News, Mateen's father said he had no idea why he did it: "I apologize for what my son did. I don't know why he did it. He is dead, so I can't ask him. I wish I knew."

Mateen had active security officer and firearm licenses, according to Florida records, and his family said he worked in security. Marriage records show he was married in Port St. Lucie in 2009, and a relative said he had a 3-year-old son. Mir Seddique, Mateen's father told NBC News, "this has nothing to do with religion." Seddique said his son got angry when he saw two men kissing in Miami a couple of months ago and thinks that may be related to the shooting.

His ex-wife told the Washington Post that he was abusive and they divorced after a few months of marriage.

...he was violent and mentally unstable and beat her repeatedly while they were married.

The ex-wife said she met Omar Mateen online about eight years ago and decided to move to Florida and marry him.

At first, the marriage was normal, she said, but then he became abusive.

“He was not a stable person,” said the ex-wife, who spoke on the condition of anonymity because she feared for her safety in the wake of the mass shooting. “He beat me. He would just come home and start beating me up because the laundry wasn’t finished or something like that.”

Mateen's religious beliefs have not yet been confirmed. Muslim groups denounced the attack Sunday morning.

"We condemn this monstrous attack and offer our heartfelt condolences to the families and loved ones of all those killed or injured," Rasha Mubarak, regional coordinator of the Council on American-Islamic Relations, said in a statement. "The Muslim community joins our fellow Americans in repudiating anyone or any group that would claim to justify or excuse such an appalling act of violence."

Note: this post covers breaking news. The facts aren't clear and even the most reliable sources and media outlets sometimes turn out to be mistaken. I'll update with further developments; please email or comment with corrections.