Demystifying Heironymous Bosch with this visual marvel of a book 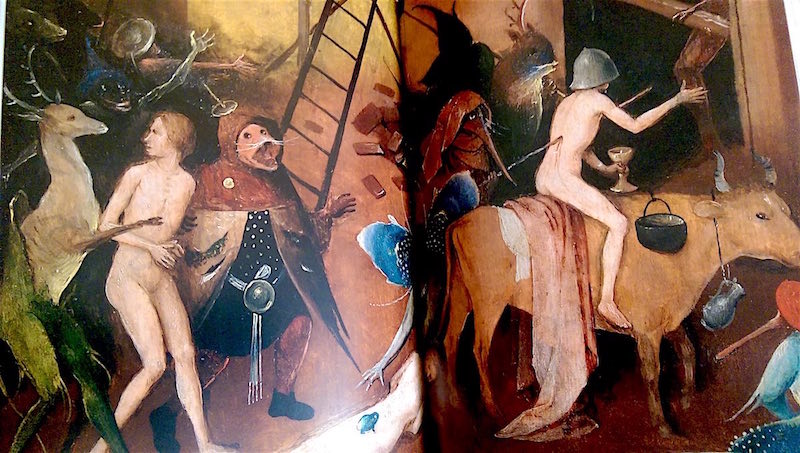 It is, perhaps, fitting that we know the date of Heironymous Bosch’s death while his date of birth remains unclear. We know that Bosch died 500 years ago and so much of what he left us is directly concerned with the afterlife or at least the spiritual journeys that humanity takes to the endpoint of life. The artwork of Bosch is wholly concerned with Christian allegory of the most human, inhuman, and superhuman variety. When one comes to behold a Bosch masterpiece, the lives of saints and the woes of sinners are the subject matter, and sometimes they are one and the same. There is a complexity that is easily identified in any one Bosch piece, but unravelling the intertwined religious and cultural allegories is beyond most. In Heironymous Bosch, The Complete Works, we are offered a unique opportunity, not only to demystify singular works of Bosch, but to take in the entire life and progression of this artist’s journey.

Bosch is a subject of his particular epoch and circumstance, as well as an innovator that transcends both. Granted access to the scholarly resources of the Brotherhood of Our Blessed Lady in the late-medieval and Netherlandish-provincial town of ‘s-Hertogenbosch, the layman Heironymous was given a unique perspective that very few outside the clergy enjoyed in this period. To look upon his works, from The Garden of Earthly Delights to The Last Judgement, one is not just witnessing the depiction of an event from scripture but rather a studied worldview, laid out in full, of a transitional moment between the late Gothic and early Renaissance.

Heironymous Bosch, The Complete Works may be primarily an art book at which one can visually marvel for hours, but it is well worth noting that the textual journey is equal to the imagery on display. It is genuinely surprising that this book is so very enlightening in the text by Stefan Fischer that accompanies the works themselves. While our modern tendency might be to shallowly interpret the many impish grotesques that populate Bosch’s work as overt evil by their displeasing appearance alone, in doing so we would miss the deeper religious allegory, the intertextual allusions to a tradition of religious artwork, and the genius of the original hybrid drolleries that Bosch uses to symbolize, in sometimes quite elaborate visual metaphors, the vices of humankind. Fischer guides the reader through these works, adeptly identifying not just what is being displayed, but why these creatures exist on the canvas. As a result, Fischer’s text becomes profoundly useful for navigating and better appreciating the meticulous detail of Bosch’s overwhelmingly busy scene-scapes.

Take, for example, from The Temptation of St. Anthony the creature on skates with a note pierced by its beak and a funnel for a hat from which extrudes a branch with a red ball tied to it by a string. Whereas I would simply be perplexed by this odd monstrosity, Fischer explains these details fully. The devil messenger bears a letter of indictment for St. Anthony’s sins and he skates to invoke from the local vernacular an adage similar to “skating on thin ice” in relation to the saint’s carelessness in his prior ways. As for the hat, it is the manifestation of these past sins with the funnel representing drunkenness just as the red ball tied to the twig represents carnal desire linked to the withering of the soul. One quickly gains an extraordinary appreciation for the complexity of Bosch’s oeuvre and it is thanks in great part to Fischer’s guidance of the readers through this fraught terrain.

This volume has been thoughtfully compiled as it includes the complete works of Bosch lavishly reproduced in both their entirety and with detailed closeups of particular portions of each work. Moreover, there are inclusions of near-contemporaneous works that inspired or were inspired by Bosch, as well as his sketches and even works created by his workshop followers. The sheer number of visual reproductions in this volume is staggering, and the physical book is a hefty object. While this review concerns the 2016 new edition, due to the timeliness of the 500-year span from Bosch’s death, Taschen has also just released a size-reduced edition with an increased page count. Whichever format one chooses to take in the magnificently bizarre works of Bosch, these releases by Taschen with the meticulous guidance by Fischer are more than collectors’ pieces. Just as Bosch’s works sought to entertain the eye while also teaching the soul, so too do these editions of Heironymous Bosch, The Complete Works seek to reproduce the spectacle of Bosch’s genius and provide the explanatory text necessary to truly appreciate the power of these otherworldly delights. – Stephen Webb