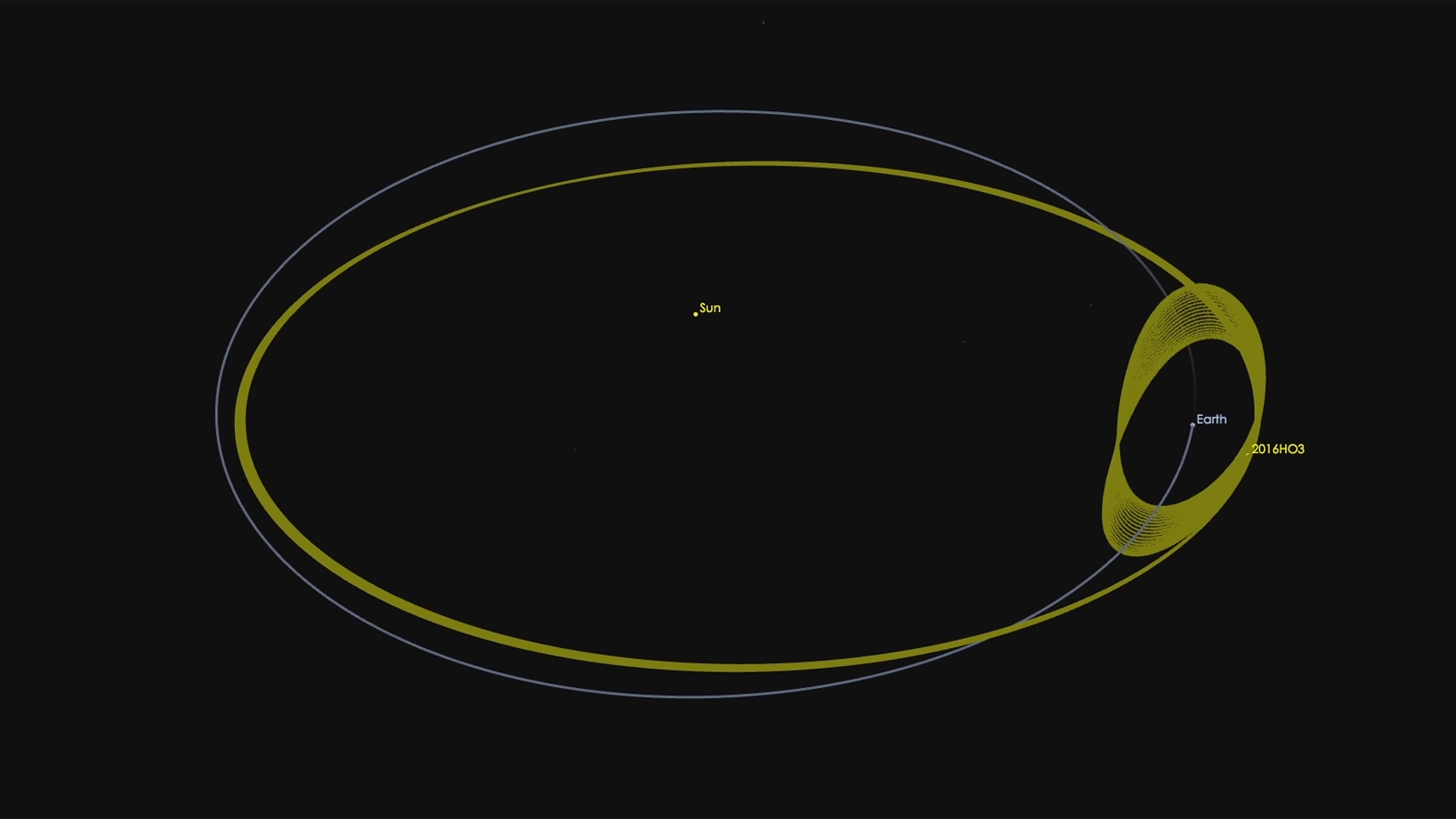 Asteroid 2016 HO3 has an orbit around the sun that keeps it as a constant companion of Earth. Credit: NASA/JPL-Caltech

NASA announced today that a small asteroid has been discovered in an orbit around our Sun that keeps it as a constant companion of Earth. And it'll stay that way for centuries to come.

As it orbits the sun, this new asteroid, designated 2016 HO3, appears to circle around Earth as well. It is too distant to be considered a true satellite of our planet, but it is the best and most stable example to date of a near-Earth companion, or "quasi-satellite."

"Since 2016 HO3 loops around our planet, but never ventures very far away as we both go around the sun, we refer to it as a quasi-satellite of Earth," said Paul Chodas, manager of NASA's Center for Near-Earth Object (NEO) Studies at the Jet Propulsion Laboratory in Pasadena, California. "One other asteroid -- 2003 YN107 -- followed a similar orbital pattern for a while over 10 years ago, but it has since departed our vicinity. This new asteroid is much more locked onto us. Our calculations indicate 2016 HO3 has been a stable quasi-satellite of Earth for almost a century, and it will continue to follow this pattern as Earth's companion for centuries to come."

In its yearly trek around the sun, asteroid 2016 HO3 spends about half of the time closer to the sun than Earth and passes ahead of our planet, and about half of the time farther away, causing it to fall behind. Its orbit is also tilted a little, causing it to bob up and then down once each year through Earth's orbital plane. In effect, this small asteroid is caught in a game of leap frog with Earth that will last for hundreds of years.

The asteroid's orbit also undergoes a slow, back-and-forth twist over multiple decades. "The asteroid's loops around Earth drift a little ahead or behind from year to year, but when they drift too far forward or backward, Earth's gravity is just strong enough to reverse the drift and hold onto the asteroid so that it never wanders farther away than about 100 times the distance of the moon," said Chodas. "The same effect also prevents the asteroid from approaching much closer than about 38 times the distance of the moon. In effect, this small asteroid is caught in a little dance with Earth."

Asteroid 2016 HO3 was first spotted on April 27, 2016, by the Pan-STARRS 1 asteroid survey telescope on Haleakala, Hawaii, operated by the University of Hawaii's Institute for Astronomy and funded by NASA's Planetary Defense Coordination Office. The size of this object has not yet been firmly established, but it is likely larger than 120 feet (40 meters) and smaller than 300 feet (100 meters).

The Center for NEO Studies website has a complete list of recent and upcoming close approaches, as well as all other data on the orbits of known NEOs, so scientists and members of the media and public can track information on known objects.