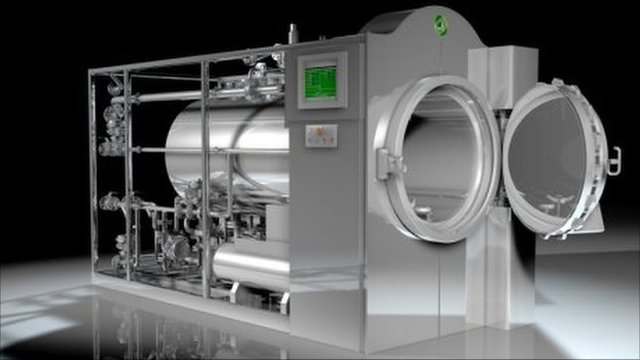 A funeral home in Ottawa, Canada, is using a new body eco-friendly disposal technique called Alkaline Hydrolysis, which leaves only a coffee-like slurry that can be simply poured down the drain.

Aquagreen Dispositions began operating in a rental unit within the former Rideau Regional Centre in Smiths Falls in May 2015 after receiving a licence from the Ontario government. Hilton's Unforgettable Tails, a parallel business handling the remains of pets, had been using the same process for a couple of years prior to Aquagreen Dispositions, but it took longer to get a licence to handle human remains.

The owner, Dale Hilton, who is from a family of funeral home operators in Smiths Falls, said he watched as the "green wave" swept through the funeral industry, bringing biodegradable caskets and urns.

We've covered the technique before here and here, where John Brownlee pointed out that a straightforward chemical disposal process is, if nothing else, more dignified than the disgusting bilking-of-the-bereaved that oftentimes goes on at funeral parlors.

Cremations take hours to complete and release carbon dioxide; the alkaline disposal system uses potash, salt and water to "break down a human body in a heated, pressurized vessel" that allows implants and artificial joints to be recovered and reused.

In wide use for animal disposal, similar equipment can be seen at Pri-Bio's Thermal Tissue Digester product page.

Here is a deleted scene from Dune where a body is broken down to water and the remains given to the dead man's killer, who must safeguard it for the tribe. This is probably just like the funerals going on in Ottawa nowadays.

A family visited the Bragg Funeral Home in Paterson, New Jersey for a private viewing of their deceased relative Doris Chapman. When they opened the casket though, it wasn’t Champman inside but someone else wearing Chapman’s clothing. And the funeral home employees didn’t believe them. The family plans to sue. From KCBD: The family says […]

Actor Luke Perry, who died last month following a massive stroke, was buried in a mushroom suit. According to his daughter, Perry had requested that upon his death he wear Coeio’s “Infinity Burial Suit” that the company describes as “made up of of mushrooms and other microorganisms that together do three things; aid in decomposition, […]

This week on HOME: Stories From L.A.:  The original Forest Lawn Memorial Park, in the hills above Glendale, may be best known outside California for inspiring the sledgehammer satire of the 1965 cult comedy “The Loved One.” For tourists and curiosity-seekers, it’s the gonzo life’s work of Hubert Eaton, who memorialized himself as The Builder […]