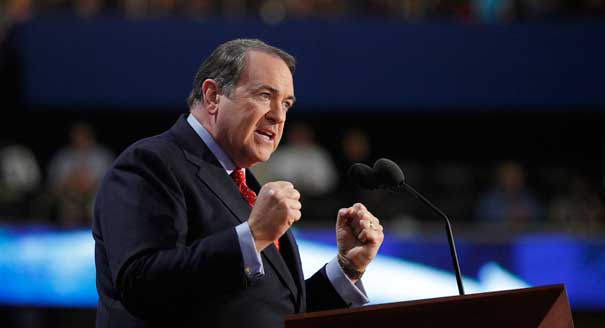 When Mike Huckabee played Eye of the Tiger at a rally for a Kentucky county clerk who refused to marry same-sex couples, it cost him big. Sued by the song's owners, he forked over $25k to settle the lawsuit.

The failed Republican presidential candidate got the usual settlement gag clause, but decided to list the payment in election disclosures. Huckabee claimed the anti-gay rally was "noncommercial" and that his use of the song met the standards for "fair use," but...

...that argument fell apart when the songwriter's lawyer pointed out that Huckabee claimed the rally as a presidential campaign expense.
He is now petitioning the Federal Election Commission to let him start a separate legal defense fund to pay off the settlement. However, the FEC just issued a draft opinion last week saying Huckabee should pay the costs himself.

Republican politicians routinely use Eye of the Tiger at rallies, and are routinely sued for it by Survivor's publishers, with Newt Gingrich and Mitt Romney among the greatest hits.