Eye-Fi orphans 14 products, which will therefore cease to function 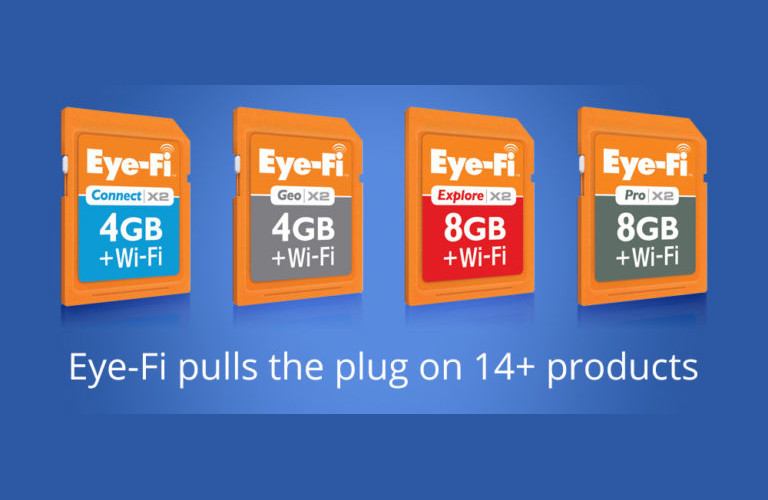 Eye-Fi makes clever wifi hotspots in the shape of SD cards; your camera sees them as SD cards but you can mount them on your network and automatically feed the images captured by your camera to a nearby laptop. But to make all this work with some models, you need an account on "Eye-Fi Center," a cloud service run by the company that sends configuration data to your card.

Some of the company's early cards have security problems, and so the company is end-of-lifing them, and taking down the Eye-Fi Center at the same time. They've warned customers that when this happens, many of the features that enticed them to buy their cards will cease to function, and they will no longer be able to readily send new configurations to their cards.

The company is offering customers a discount on a newer product, which is nice, but it doesn't change a fundamental point: when you buy a device that requires a connection to the manufacturer's server to keep running, you should assume that your device could stop working at any time, forever.

Eye-Fi is not the first company to make the decision that supporting its old customers isn't cost effective. A high-profile, recent example was Nest, Google's home automation division, which bricked a whole range of products it had acquired from a rival. And of course, gamers have long struggled with the pain of having their purchases rendered valueless by a decision to shut down a multiplayer server, made in a distant corporate boardroom without their being able to have any say.


But it's not getting better: it's getting a lot worse. The Internet of Things bubble is based on startups with six months to one year of runway, making hardware with sub-2% margins (if it's not being made at a loss), which has zero use if the company's server shuts down. What's more, with <2% margins on the hardware, every IoT company is raising capital on the promise of an "ecosystem" business, which is buzzword-speak for "We will siphon off our customers' data and sell it" and "We will force our users to buy expensive consumables" and "We will limit who is allowed to add features to our customers' property in order to prevent them from protecting their data or availing themselves of cheaper consumables, as well as to collect rent from app developers who contribute to our ecosystem."

That means that, without exception, the IoT is designed to prevent users, nonprofits, academics, or other companies from providing alternative servers to keep these end-of-life'd products alive after the company loses interest or goes bankrupt. You car's navigation system, your thermostat, your lightbulbs, your medical implant, your state's voting machines... All designed to abruptly and permanently die at the flick of a switch that you have no control over, or insight into.

Eye-Fi's actions won't be remembered as the last time a company decided to render their customers' property inert and useless. They won't even be a particularly egregious example -- wait for a company that provides cloud service for cities' emergency dispatch system to pull the same stunt! But this is a harbinger and a portent, and it's one we should pay attention to.

EYEFI TO DROP SUPPORT FOR SOME CARDS. THEY WILL ‘MAGICALLY’ STOP WORKING ON SEPTEMBER 16, 2016

I just purchased my X2 card, why aren’t you supporting it anymore?


(Thanks, Gianteye and Ted W!)