Obama says US drones strikes have killed up to 116 civilians, watchdogs say real count is higher 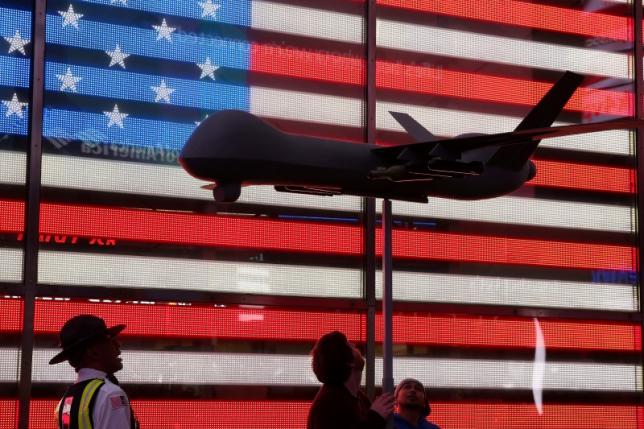 An official instructs two protesters to lower their Reaper drone model as they take part in a protest in Times Square NYC, May 24, 2016. REUTERS

The Obama administration today “partially lifted the secrecy that has cloaked one of the United States’s most contentious tactics for fighting terrorists,” as the New York Times puts it, and revealed that it believes U.S. airstrikes conducted outside established war zones like Afghanistan have killed as many as 116 civilian bystanders. The administration says it also killed an additional 2,500 people in those non-war-zones who were members of terrorist groups.

The assessment of the drone death toll is long-awaited, and human rights groups say the real number is much higher. In releasing the acknowledgement, the U.S. is basically admitting also that it has no way of really knowing how many civilians it kills.

Is it a wacky coincidence that the number of innocent people we have killed with drone strikes outside of war zones was released at the end of the day on a Friday before a big holiday weekend? Nope.

The official civilian death count is hundreds lower than most estimates compiled by independent organizations that try to track what the government calls targeted killings in chaotic places like tribal Pakistan, Yemen, Somalia and Libya. Most of the strikes have been carried out by drones, though a small number have involved traditional aircraft or cruise missiles.

At the same time, President Obama issued an executive order making civilian protection a priority and requiring the government in the future to disclose the number of civilian deaths each year. The order, which could be canceled or altered by a future president, tries to commit his successors to greater openness than he achieved in the first seven years of his presidency.

In a seeming acknowledgment that the long-anticipated disclosure would be greeted with skepticism by drone critics, the administration released the numbers on a Friday afternoon before a holiday weekend. The use of a range of estimated civilian deaths underscored the fact that the government often does not know for sure the affiliations of those killed.

The executive order signed by Obama today says “civilian casualties are a tragic and at times unavoidable consequence of the use of force in situations of armed conflict or in the exercise of a state’s inherent right of self-defense.” It goes on to detail what the U.S. defines as “best practices” to reduce the likelihood of killing innocent people, and “take appropriate steps” when we accidentally murder them with drones.

Related coverage by Spencer Ackerman at the Guardian: "Obama claims US drones strikes have killed up to 116 civilians"