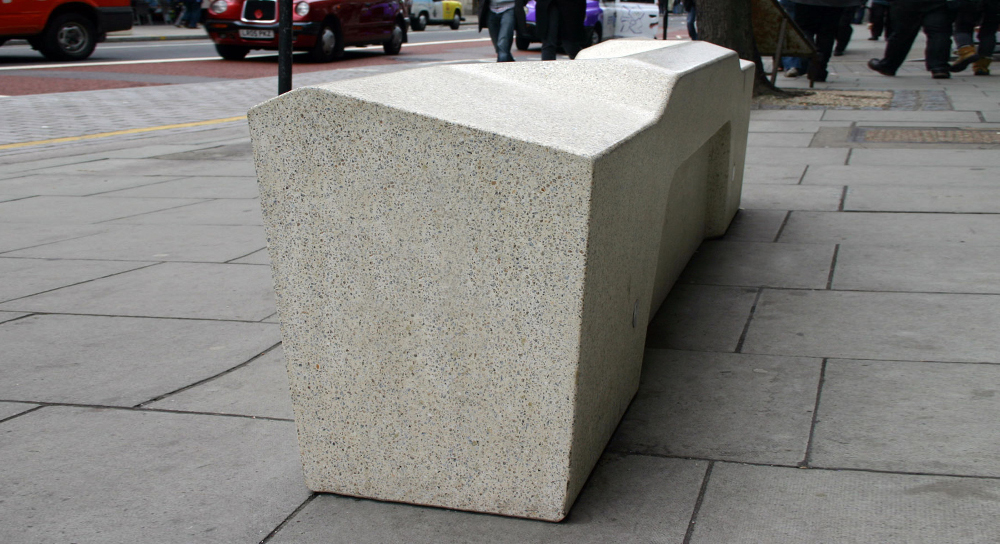 Selena Savić and Gordan Savicic (previously) have published Unpleasant Design, their long-awaited book on "design that bullies its users" — that is, devices, street furniture, tools and products designed to control humans.

The literal poster-child for Unpleasant Design is the Camden Bench (above), commissioned by the London Borough of Camden, intended to prevent any use apart from brief sitting (no lying down, dealing drugs, skateboarding, etc).

The latest episode of the excellent 99% Invisible podcast focuses on Savić and Savicic's work, and is utterly fascinating (MP3).

Be sure to listen to the end, where they talk about how this turns into a huge collective action problem, using the example of "pigeon spikes." When pigeons are evenly distributed through a city, they're not a big deal. But if everyone except you has pigeon spikes, your home will be covered in all the pigeon shit for the whole population of pigeons.

Dan Lockton was another early theorist on this kind of design pattern. His work on "architectures of control in design" are an important contribution to the discussion.

The Camden Bench is virtually impossible to sleep on. It is anti-dealer and anti-litter because it features no slots or crevices in which to stash drugs or into which trash could slip. It is anti-theft because the recesses near the ground allow people to store bags behind their legs and away from would be criminals. It is anti-skateboard because the edges on the bench fluctuate in height to make grinding difficult. It is anti-graffiti because it has a special coating to repel paint.

Most of these goals seem noble, but the overall effect is somewhat demoralizing, and follows a potentially dangerous logic with respect to designing for public spaces. When design solutions address the symptoms of a problem (like sleeping outside in public) rather than the cause of the problem (like the myriad societal shortcomings that lead to homelessness), that problem is simply pushed down the street.