Deals on gadgets from Boing Boing and Morningsave 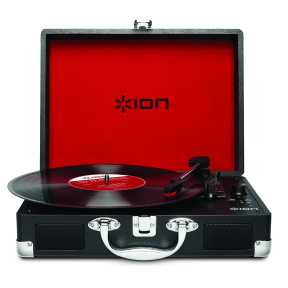 We've come together with our pals at Morningsave to offer you a couple neat gadgets! All three were things we collectively thought were fun to play with, and that you might like! Check them out...

First up, for only $39, we've got the Ion Audio Vinyl Motion Portable Turntable. This portable record player comes in a suitcase, just like that first record player you got 40 years ago. Unlike the tinny sounding beast of yesteryear, this guy comes with both RCA and USB outputs! Readers with an eye to the future will encode their vinyl as MP3s!

Next we've got the Nabi Look HD action camera. Unlike more expensive models, at 5 to 10x the price, this camera is cheap. $35 cheap. If you want a camera that'll record 1080p video, in an underwater housing, that you don't mind losing or destroying, this is the camera for you! While the Nabi Look outputs to microSD, and has a bunch of other features, mostly what this camera is notable for is not being valuable. Opens up a lot of possibilities in the world of action cameras, doesn't it?

I was excited to see some photos taken with the Cheerson CX-10C Video Cam Quadcopter. I am still waiting. Thus far I can barely get the thing to hover without careening into a wall. The copter does come with a 2GB microSD card and certainly implies that a competent pilot could capture some interesting shots. Maybe you'll have better luck. I'd stick with the record player.

All three of our Morningsave deals will be available until Bastille Day, where in solidarity with our French friends we will close the sale.

The Kindle Oasis is lovely, but $200 is too pricey for an e-reader. The Kindle Paperwhite is the one I recommend and 35% off today at Amazon, bringing the price down to $85. This is a great deal and maybe signals imminent new products, but it’s not as if “basic decent e-reader” is a category […]

I finally pulled the trigger on the new iPad Pro because of today’s deals at Amazon; affiliate links follow below. Every year I throw all my computers in a dumpster and make another desperate, clawing, doomed effort to use an iPad Pro as my “only machine” and it is once again Time. Here’s what’s up: […]