Howto: be a smart consumer of breaking news 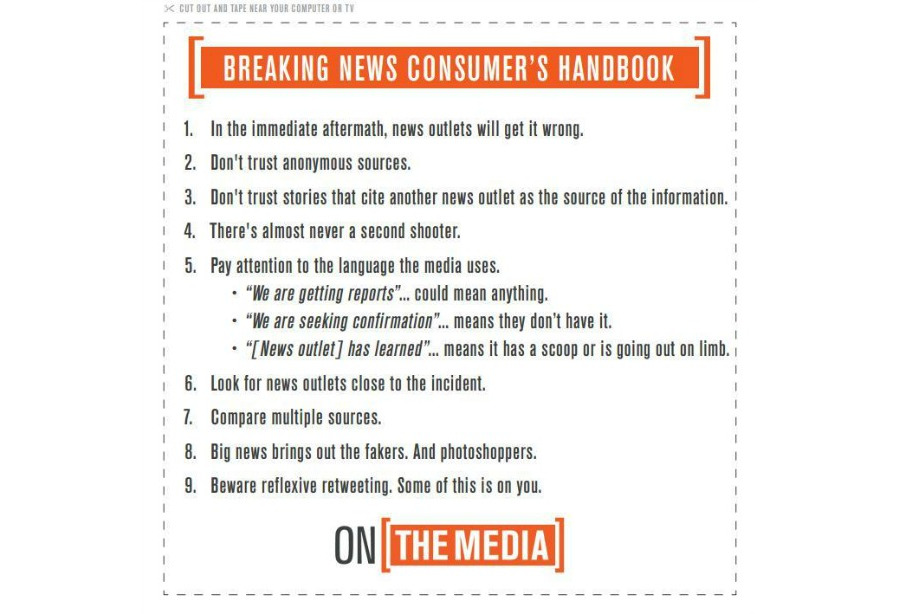 On the Media's classic "Breaking News Consumer's Handbook" is a timeless, concise, and essential guide to the way that the media reports on events like last night's shooting in Dallas, and how you can get at something like the truth through cautious, critical thinking.

On the Media is a must-listen radio show/podcast on media literacy -- the host, Brooke Gladstone, wrote an essential graphic novel about media literacy in 2011: The Influencing Machine.


The guide breaks down into 9 parts. My favorite is number 5, which highlights the weasel words that mean that you're hearing something that could be a pure fabrication:

5. Pay attention to the language the media uses.

Whether you realize it or not, the language the media uses tells you how reliable it is. Here's a helpful glossary:

*
"We are receiving reports" - sources are claiming something has happened, but it has not been confirmed.

*
"We are seeking confirmation" - the news outlet is confident, but still can't confirm.

*
"We can confirm" - information has come from multiple sources, and the news outlet feels confident that it can claim something as an actual fact.

*
"We have learned" - how a news outlet declares it has a scoop. As Andy Carvin says "on the one hand, it could mean that they’re the first ones to confirm something. Or they’re going out on a limb and reporting something that no one else has felt comfortable reporting yet."