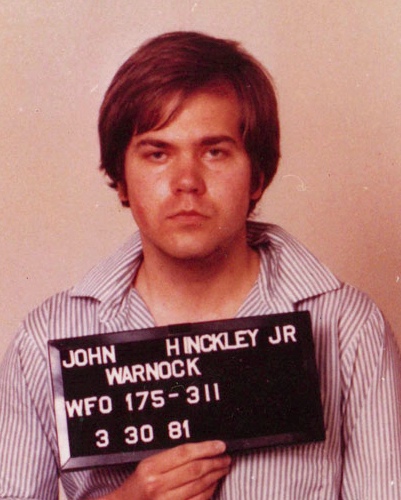 On March 30, 1981 in Washington DC, John Hinckley fired six bullets at President Ronald Reagan in an effort to impress the actress Jodie Foster. Reagan fully recovered but his press secretary, James Brady, who was also hit, lived the rest of his life in a wheelchair. The courts found Hinckley not guilty by reason of insanity. As soon as next week, Hinckley will be released from the mental hospital where relives to stay with his elderly mother in Williamsburg, Virgina. From NPR:

Under the terms of the order, Hinckley is not allowed to contact his victims, their relatives or actress Jodie Foster, with whom he was obsessed. Hinckley also will not be permitted to "knowingly travel" to areas where the current president or members of Congress are present. The judge said Hinckley could be allowed to live on his own or in a group home after one year.


"Mr. Hinckley shall abide by all laws, shall not consume alcohol, illegal drugs... shall not possess any firearm, weapon, or ammunition and shall not be arrested for cause," Senior U.S. District Judge Paul Friedman ordered...

In a prepared statement, the Ronald Reagan Presidential Foundation and Institute said, "Contrary to the judge's decision, we believe John Hinckley is still a threat to others and we strongly oppose his release."

"John Hinckley, Who Tried To Kill A President, Wins His Freedom"