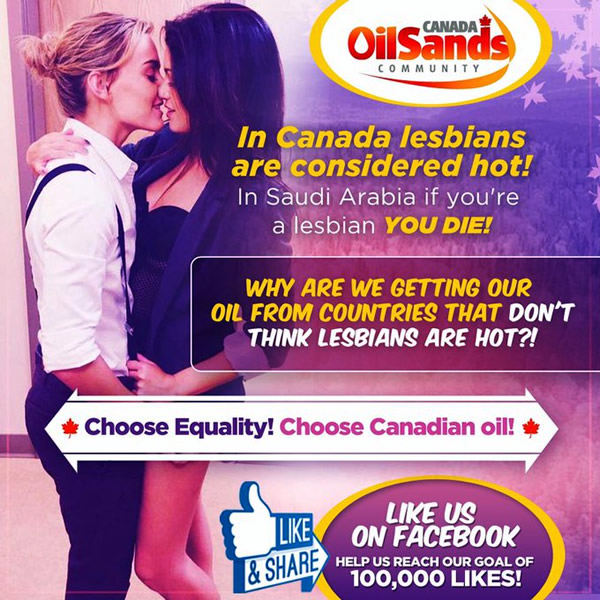 The "In Canada lesbians are considered hot!" campaign is the brainchild of Robbie Picard, a tar-sands booster from Fort McMurray, Alberta.

Leaving aside all the wrong in this campaign (ohgodsomuchwrong), Mr Picard seems to have missed the fact that you can support LGBTQ rights in Saudi Arabia and oppose the extraction, refinement and consumption of Canada's filthy, planet-killing tar sands.

Like Levant, Robbie Picard is also a promoter of the Oil Sands who uses the ideas behind “ethical oil”. Picard is an openly gay, Métis (having both European and First Nations ancestry) man who’s considered to be the unofficial ambassador for Fort McMurray, a city located in the heart of the Oil Sands (it’s also been recently devastated by an incredibly huge forest fire). Like many people who live there, he came seeking his fortune in the oil industry. He was profiled just earlier this month in Alberta Oil.

Picard used to be associated with the I Love Oilsands campaign, but split off from that group to become independent, and now promotes the Oil Sands in the Canada Oil Sands Community Facebook group, which has about 14,000 followers.

This ill-advised “hot lesbians” ad promoting Canadian vs. Saudi oil is real, and not a parody by “The Onion”
[Joey DeVilla]