TSA approves having a mummified head as your carry-on luggage, with reservations 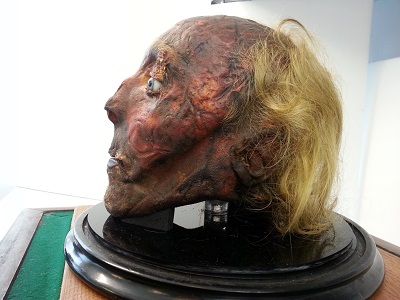 As long as it is "properly packaged, labeled and declared," one may take Victorian philosopher Jeremy Bentham's mummified head onto your flight. The TSA added that travelers may simply snap a picture and tweet it to @AskTSA if they are in any doubt about the flight-legality of any desiccated human remains with which they wish to fly.

Have you ever debated about whether or not you can pack a certain item in your checked or carry-on bag? Like the mummified head of #JeremyBentham for example… Fret no more! Now you can simply snap a picture and tweet it to @AskTSA or send it via Facebook Messenger and our team will get back to you promptly with an answer. If you're a regular follower of this account, I'm sure you can think of many situations where it would have behooved somebody to send us a picture first. And that's not all. Contact us about any TSA related issue or question you might have. We can even help you with TSA Pre✓® issues. We look forward to answering your questions, 8am-10pm ET weekdays; 9am-7pm weekends/holidays. #AskTSA #TSATravelTips

Jeremy Bentham was an English philosopher who died in 1832, but not before requesting that a physician friend publicly dissect him and then preserve him as an "auto-icon." This was achieved by clothing his skeleton in one of his suits, sitting it on a chair and displaying it inside a wood cabinet. Originally, Bentham's preserved head was supposed to be attached to the auto-icon, but it turned out to be pretty gross, so a wax replica was made instead.

Bentham was into utilitarianism, social reforms and animal rights. The auto-icon is on display at the University College of London. If you can't visit him in person, you can still check out the scenery thanks to a webcam mounted on his cabinet.