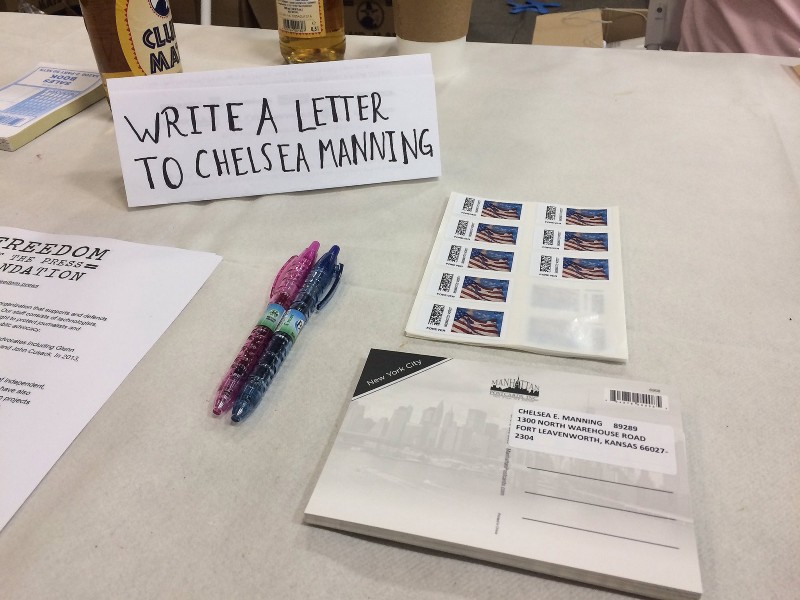 Chelsea is a transgender woman who, despite her gender identity being acknowledged by the world, is forced by the U.S. to serve out her sentence in an all-male maximum security prison. To be a woman imprisoned among men is a most gendered form of cruel and unusual punishment, but America's hatred and misunderstanding of trans people allows this to be the norm.

Manning “has been systematically mistreated by the U.S. government since she was first taken into custody in 2010,” says Fight for the Future, “including long stretches of solitary confinement--which the UN considers to be a form of torture--which she was subjected to for 9 months, even before she had ever been convicted, and continuing to deny her the medical treatment she needs for her gender dysphoria, which medical experts have clearly stated is the only course of treatment in which she would no longer be suicidal.”

At this time, Chelsea is not receiving adequate psychological counseling, as her course of treatment is constantly irregular and therefore less effective. Having uncertainty, from day to day, regarding what medical treatment she is even going to receive is stressful in itself, and is certainly not what someone recovering from a suicide attempt should be subjected to.

Manning's support team today posted an update from the former Army on her 'spirit and well being' today, and we are sharing it in full, below.

I thought it might be a good idea to say a few words about how I am doing.

I have been feeling a little better. Certainly better than the week before last, when I was first served with these charges. Your outpouring of support has been incredible. You have made a real difference in my feelings about myself and my situation.

One thing I’ve had to learn to remember, is that there are thousands of people all over the world thinking about me every day. Knowing that does help me get through my day. It helps me to get up in the morning, and it helps me have the strength go through this routine that has become my life.

You have been expressing concern for me on social media. I am hearing you. You make a difference. You make me feel a little better, as I learn how to grow and adapt.

I have been reading the letters and cards you have been sending, reading math research papers, and resting. You have sent me many different types of letters. All of your letters have been positive. You have written me letters of support. You have also asked me specific questions about myself. And also about how I feel about events going on “out there” in the world.

For now, I remain hopeful. But, I also remain realistic.

I am astonished at the breadth and heart of your voices with your petitions to drop the charges by the prison for a suicide attempt. My court martial appeal is still ongoing. I am still seeking appropriate psychological, psychiatric, and medical care for my gender transition.

Today, I am inspired and motivated to keep writing, educating myself, and speaking out on matters that we know are important.

Only your incredible support could have made this happen.