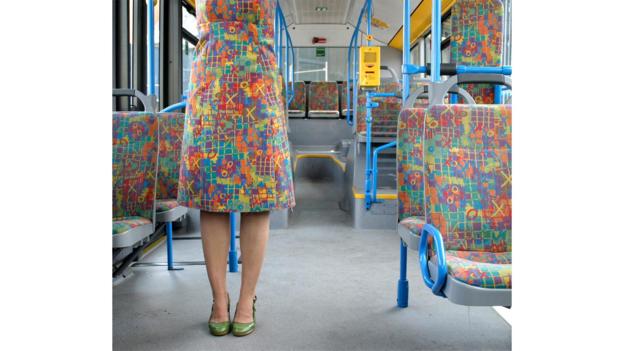 Public transit upholstery is a marvel of stain-resistance, long-wearing durability and bizarre abstract patterns meant to deny the shifting conventions of fashion: all these make it (semi-)perfect for "Bustour," German artist Menja Stevenson's 2008 transit couture project, which has her creating lovely -- if stiff and uncomfortable -- outfits out of transit fabric and then riding trains, documenting the reactions of people who encounter her chameleonsuit look.

"I had to get into contact with the transport companies to get the fabrics; they're not officially available. I had to do a lot of persuasive effort to convince the companies to hand over the fabric! I was very proud of myself when I finally got them. I found some conservative looking dressmaking patterns on the internet, and the bags are my own design. It wasn't easy for me to sew the dresses; the rough and stiff fabric often broke the needles.

"Wearing them, you sweat like crazy, they feel like a knight's armor and it's hard to act naturally. I couldn't believe that many people didn't realize the connection seeing me and the seats together. Did they think that it was sheer coincidence? Some curious people at least talked to me, and a very few laughed, but most passengers would look shyly at me and quickly look the other way again."

Why is train-seat fabric so hideous [BBC]