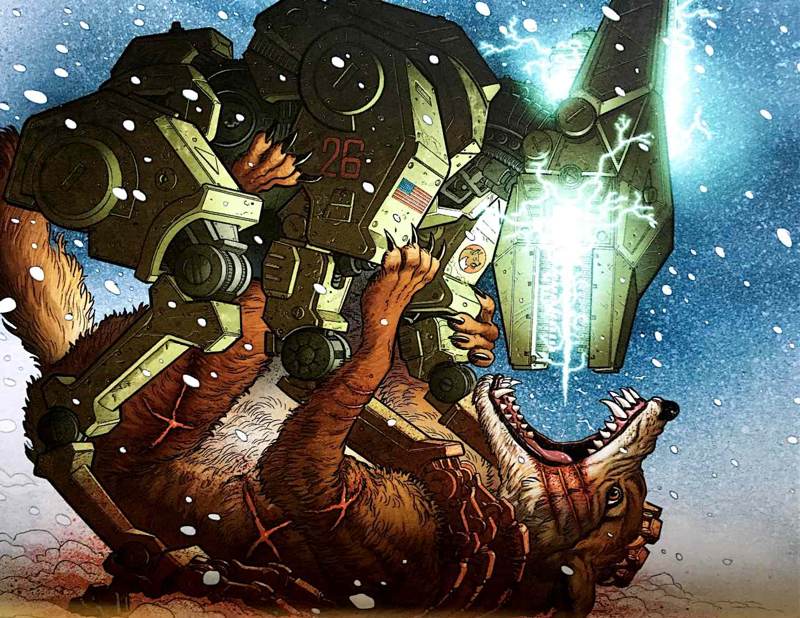 We Stand on Guard

You know those cheeky jokes about the United States invading Canada? No one is laughing in Brian K. Vaughn’s We Stand on Guard, an extremely tense, often brutal, military sci-fi thriller with an obvious political point to make.

Some 100 years in the future, an allegedly Canadian drone strike on the White House destroys it, killing the president. The US responds with everything it’s got while Canada screams false flag attack, an excuse for the US to come after Canada’s precious water resources (which, surprise, the US is plumb out of). The US deploys its immense drone arsenals, including giant, stompy mecha robots, and “hoser ships,” aerial tankers that fly over Canada sucking up all of her water. The story in the book revolves around a group of Canadian guerilla fighters trying to repel the US occupation.

While the subject matter is intense and the pacing of the book rarely lets you catch your breath, there is levity, too. There are plenty of insider Canadian jokes, a character from Quebec whose French dialog is never translated, and an ongoing bit about Superman having Canadian roots (he was co-created by Canadian artist Joseph Shuster). And while there is plenty of action, with everything from skirmish combat to giant, all-out battlefield hellfire, this is a very dialog-driven book and a book that is chalk full of interesting speculative tech and a believable near-future world.

A country being occupied by a vastly superior high-tech military, with questionable evidence to justify its actions, and irresistable natural resources that just happen to be sorely needed by the invaders... Hmmm, where have we heard this story before? Having the enemy be Canada, not Iraq, definitely changes the way that you relate to the guerillas and your shifting allegences to who the “good guys” actually are.   This hardcover edition, collecting the first six issues of the series, is beautifully produced. Besides the series, there is a sketchbook in the back showing dozens of artist Steve Skroche’s sketches and pre-colored panels. – Gareth Branwyn

BTW: I found that this book had a lot of thematic and stylistic similarities, as well as a similar level of white-knuckled ferocity, to Letter 44. If you enjoyed that series, you’ll probably want to check out We Stand on Guard.