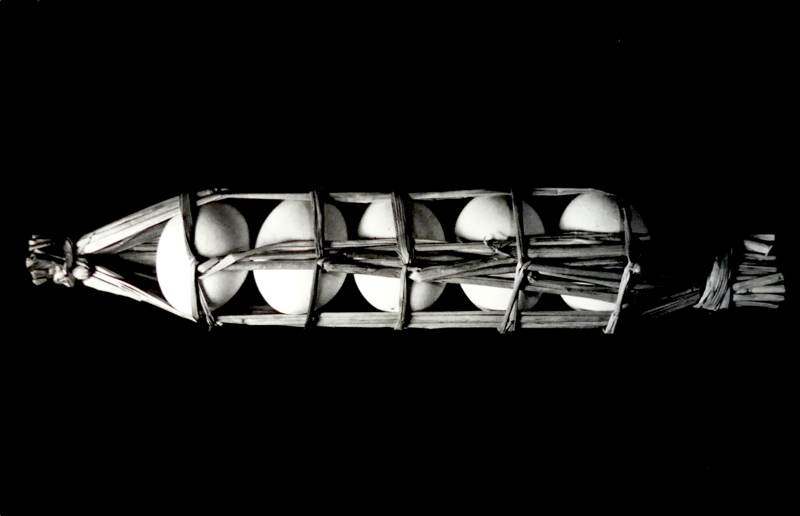 How to Wrap Five Eggs: Japanese Design in Traditional Packaging

This book is a museum of traditional packaging artifacts from Japan. Before the age of plastic, the Japanese perfected the art of packing consumables in incredibly ingenious ways. They excelled in using natural materials such as paper, straw, clay, and wood. Much of the packaging looks astonishingly modern, even though the form may be hundreds, if not thousands of years old. In fact, packages in Japan today often are wrapped in the same way. I recently received a gift from Japan that contained seven layers of boxes within boxes, wraps within wraps, each layer its own exquisite art, the packing at least equal to the cost and worth of the gift inside. There is a mesmerizing variety of packing collected during the last years of traditional Japan on display here. Each artifact is featured in stunning black and white photographs. It is a real inspiration for both designer and maker. Long out of print, this masterpiece of design was first published in 1967; used copies can be found today at rare book prices. It has also been republished in a modified paperback form, that contains some of the original content at a smaller scale.

“America’s #1 lubricant brand” K-Y has a new look. Intentionally designed to represent a vulva, the brand’s new logo is described as follows by its creator, Design Bridge New York: A strong symbol of female sexual power was placed right at the heart of the new brand identity – the ruby. Framed perfectly by the […]