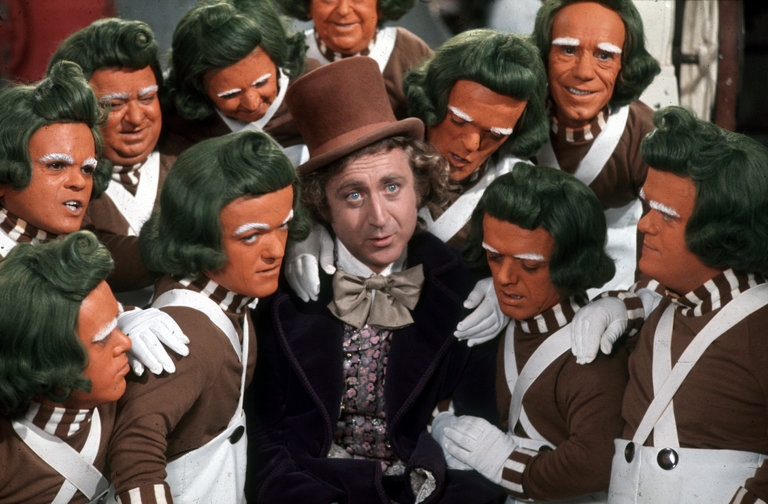 Eric Weissmann, who was Mr. Wilder’s lawyer for many years, confirmed the death to the New York Times.

Many of the films for which Wilder will best be remembered were by the legendary director Mel Brooks, who acknowledged his longtime friend and collaborator in a tweet.

Gene Wilder-One of the truly great talents of our time. He blessed every film we did with his magic & he blessed me with his friendship.

Variety reports that Wilder died Monday at his home in Stamford, Connecticut. His nephew Jordan Walker-Pearlman said he died of complications from Alzheimer’s disease.

Actor Gene Wilder and his wife Karen Boyer watch the match between Rafael Nadal of Spain and Mikhail Youzhny of Russia during the U.S. Open tennis tournament in New York, September 11, 2010. REUTERS

The comic actor, who was twice Oscar nominated, for his role in “The Producers” and for co-penning “Young Frankenstein” with Mel Brooks, usually portrayed a neurotic who veered between total hysteria and dewy-eyed tenderness. “My quiet exterior used to be a mask for hysteria,” he told Time magazine in 1970. “After seven years of analysis, it just became a habit.”

Habit or not, he got a great deal of mileage out of his persona in the 1970s for directors like Mel Brooks and Woody Allen, leading to a few less successful stints behind the camera, the best of which was “The Woman in Red,” co-starring then-wife Gilda Radner. Wilder was devastated by Radner’s death from ovarian cancer in 1989 and worked only intermittently after that. He tried his hand briefly at a sitcom in 1994, “Something Wilder,” and won an Emmy in 2003 for a guest role on “Will & Grace.”

Gene Wilder (L) performs alongside compatriot Rolf Saxon, during the rehearsal of a scene from Neil Simon's 'Laughter on the 23rd Floor', in New York, October 2, 1996. . REUTERS/Shawn Baldwin

His nephew said in a statement,

“We understand for all the emotional and physical challenges this situation presented we have been among the lucky ones — this illness-pirate, unlike in so many cases, never stole his ability to recognize those that were closest to him, nor took command of his central-gentle-life affirming core personality. The decision to wait until this time to disclose his condition wasn’t vanity, but more so that the countless young children that would smile or call out to him “there’s Willy Wonka,” would not have to be then exposed to an adult referencing illness or trouble and causing delight to travel to worry, disappointment or confusion. He simply couldn’t bear the idea of one less smile in the world.

He continued to enjoy art, music, and kissing with his leading lady of the last twenty-five years, Karen. He danced down a church aisle at a wedding as parent of the groom and ring bearer, held countless afternoon movie western marathons and delighted in the the company of beloved ones.”

Wilder had been diagnosed with non-Hodgkin’s lymphoma in 1989.

In 1963, the Milwaukee native appeared on Broadway opposite Anne Bancroft in Jerome Robbins’ Mother Courage and Her Children. The actress introduced Wilder to Brooks, her future husband, and the couple invited him to Fire Island, where he got a look at the first 30 pages of a screenplay titled Springtime for Hitler.

“Three years went by, never heard from [Brooks],” Wilder told Larry King in a 2002 interview. “I didn’t get a telegram. I didn’t get a telephone call. And I’m doing a play called Love on Broadway, matinee, taking off my makeup.

“Knock-knock on the door, I open the door. There’s Mel. He said, ‘You don’t think I forgot, do you? We’re going to do Springtime for Hitler. But I can’t just cast you. You’ve got to meet [star] Zero [Mostel] first, tomorrow at 10 o’clock.’

“[The next day] the door opens. There’s Mel. He says come on in. ‘Z, this is Gene. Gene, this is Z. And I put out my hand tentatively. And Zero grabbed my hand, pulls me to him and kisses me on the lips. All my nervousness went away. And then we did the reading and I got the part. And everything was fine.”

Springtime for Hitler, of course, would become The Producers (1968), written and directed by Brooks. For his portrayal of stressed-out accountant Leopold Bloom in his first major movie role, Wilder earned an Oscar nomination for best supporting actor.

THR and other obituaries note that Wilder was born June 11, 1933 in Milwaukee, Wisconsin, as Jerry Silberman. His dad was a Russian immigrant who imported and sold miniature beer and whiskey bottles. His mother had a heart attack when he was 6, leaving her severely disabled.

Actor and author Wilder poses as he autographs his book 'The Woman Who Wouldn't' during a 2008 book signing session in New York. [Reuters]