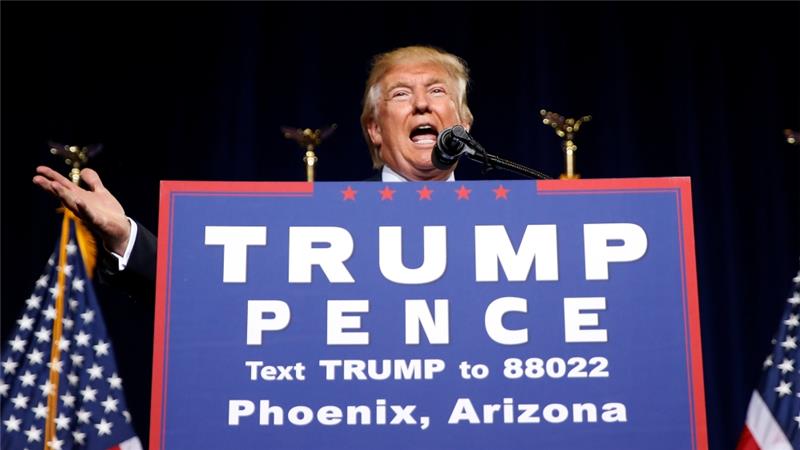 After a very weird day in Mexico with President Enrique Peña Nieto, then a Twitter shitstorm in which Trump was accused of lying about the content of that meeting, the Republican Presidential candidate gave a long-awaited speech in Arizona that was to put forth his policies on immigration.

This looks like it could be a still from some 90s spoof movie. pic.twitter.com/oiT9Y2KGKz

You can watch the speech in entirety at CSPAN.

Some semblance of an immigration policy was there, to the extent that Trump is capable of conceiving of or describing actual government policy that some version of the American government can carry out. But what will be remembered–and Trump commanded his audience to "remember" the night–is how much this garbage sounded like the same old garbage he's been spewing all along.

In the speech, Trump called for "Ideological certification" of all would-be immigrants, and said we should only let people in who "love us." This is fine. Not fascist at all.

He then promised to "triple the number of ICE deportation officers" needed to enforce his mass deportation master plan. It is a beautiful plan, and he explained that it would be accompanied by a big, huge, beautiful, "impenetrable," tall proud wall that sounded very phallic.

Then, he said of Democratic nominee Hillary Clinton, "Maybe they'll deport her."

Trump's new plan to send his political enemies into exile is substantial softening of his earlier plan to have them killed.

His on-stage hype men wore "Make Mexico Great Again Also" hats, which reports say Trump came up with himself and made Rudy Giuliani wear on stage.

He opened his speech by detailing the stories of undocumented immigrants who committed violent crimes, telling thousands in the convention centre in downtown Phoenix that he had "met with many of the great parents who lost their children to sanctuary cities and open borders".

Later, he pledged to impose "ideological certification" for immigrants seeking to enter the US, to include questions about so-called honour killings, women, gays and "radical Islam". He said immigration would be suspended from countries like Syria and Libya.

He raged against low-skilled undocumented immigrants who compete with US citizens for jobs and pledged to "remove criminal aliens immediately".

He also reaffirmed his pledge to build a wall on the country's southern border with Mexico, as supporters chanted "Build a wall".

Earlier in the day, news pundits described Trump's posture during the Mexico City photo op as "presidential." Tonight in Arizona, the tone was pure nationalist, fascist, xenophobic red meat. Comparing him to Hitler is too easy — he's more V for Vendetta villain.

You can read a detailed analysis of the Trump Arizona speech here. God bless all the fact-checkers and hot-takers tonight. Theirs is a hard job.

Below, some of the voices of reason in my Twitter feed, while I was watching the speech.

To all the pundits who said Trump seemed so presidential 6 hours ago. pic.twitter.com/F3s7MW5cbQ

Trump just confirmed that all 11 million are subject to immediate deportation if they are picked up for anything.

Trump surrounded on Phoenix stage by "Angel Moms" who say their kids were murdered by illegal immigrants. This is pretty much a hate rally.

This speech proves no softening. So the only possible reason Trump didn't confront Mexico's president about the wall is he chickened out

Trump will visit Mexico but not a black neighborhood in America

"That's tough stuff, I will tell you." That's how Trump, a man who wants to be president, reacted to the Angel Moms.

Trump wants to select immigrants "based on their likelihood of success."

What if they filed for bankruptcy four times, Mr. Trump?

This address may not have been designed to attract suburban independent voters in swing states.

MS13 an example of this. And the US backed & orchestrated military coups in Central America that created perma chaos https://t.co/rOxXLlz6UQ

This Trump use of Angel Moms seems to emphasize that immigration reform is about Americans' mortal safety, not economics or migration policy

This "angel mom" stuff is so deeply cynical. And dangerous.

The way they call people "illegals" – so dehumanizing.

"Ideological certification" is for those who hate political correctness because it lacks a heavily-armed bureaucracy https://t.co/5WXLWQQPB4

Classic bully. Confronted with the humanity of his enemy, he falters. Surrounded by safety of followers, he strikes from afar. #TrumpSpeech

Well, there goes the black vote, the Latino vote, the college educated vote, the Romney-Bush vote. But he's keeping the Paul LePage vote.

Donald Trump is like a DDOS attack on fact-checkers

Trump positioning himself as the "last chance"…that's the kind of shit that's going to get people physically hurt when he loses.

I wish I loved anything as much as Trump hates immigrants.

It's really hard to see from these seats in the back #TrumpAZ pic.twitter.com/23UAqfcZq2

Shouts from the crowd:

And about a few middle fingers…

This was fascinating jujitsu-We don't want ill immigration from Mexico, but hey, you don't want it from C America https://t.co/bRvT9itILW

This isn't about immigration. Trump wants to round up Latinxs. Not scary to you? Imagine if this speech was about a group you're part of.

1. Got nothing in face to face meeting.

You do the math.

"ideological certification" worries me because I always tended to choke on important exams and worry that I'll be deported for thoughtcrime.

If you wanna know how Trump's speech is landing, David Duke is livetweeting it.

Fact: "The crime will stop. It will be over."
Check: First-generation immigrants commit crimes at lower rates than native-born Americans.

This is easily one of the most grotesque speeches he's given.

You will be shocked to know that mandatory detention/deportation of all border crossers violates the UN Convention on Refugees.

Trump's brand of virulent, overt, aggressive racism doesn't usually make its way to the national stage.

This is how I imagine highly coked-up TV producers in the 1970s talked all the time.

This is is not a general election speech. It's pure id to id communication.

I've had acid trips that lasted longer than these trump pivots

"Believe me" is one of Trump's constant verbal tics. Experience shows it's usually said by someone who's dissembling.

Reality check: This is what deporting 11 million people would actually look like. https://t.co/KfFEShVsdA pic.twitter.com/c4p4cR48lC

.@realDonaldTrump Just give me a hint on how we get rid of you. Does it involve solving a riddle

Classic bully: Trump was too weak and cowardly to deliver say any of this to the Mexican president. Real tough behind his podium, though.