Trump and Mexico president Peña Nieto talk about a wall, but not about who pays 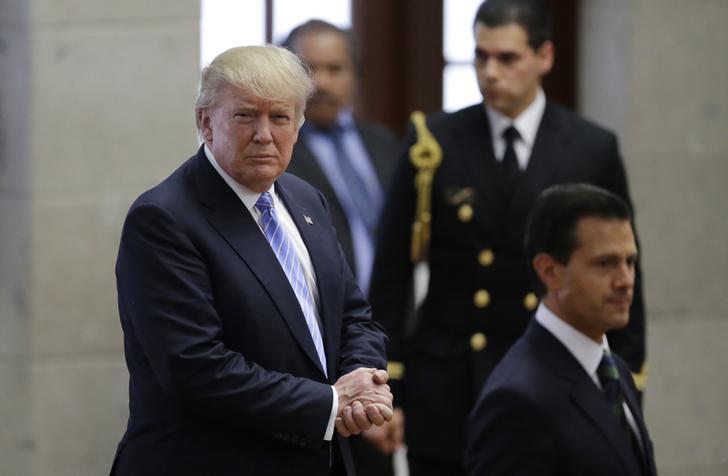 Republican presidential nominee Donald Trump made a quick trip to Mexico today to meet with President Enrique Peña Nieto, against the objections of many citizens of Mexico, who have been insulted by Trump pretty much every day of the campaign, for more than a year.

LIVE: Trump says he told Mexico president that either country should have right to build wall or barrier on border pic.twitter.com/QcvaEiawwV

Trump says he chatted with the Mexican president about the wall Trump wants to build to keep Mexican migrants out, but they didn't talk about who would pay for this wall.

Mexico's President Enrique Peña Nieto: The Mexicans in the U.S. "deserve the respect of everyone" https://t.co/hNxGpX7V6d

Demonstrators hold placards during a protest against Trump's visit, at the Angel of Independence monument in Mexico City. REUTERS/Tomas Bravo

The predominant feeling in the Mexican capital "is one of betrayal," reports the New York Times.

"It's a historic error," historian Enrique Krauze told the paper. "You confront tyrants, you don't appease them."

On Mexico's most popular morning television show on Wednesday, a livid Mr. Krauze likened the president's meeting with Mr. Trump to the decision by Neville Chamberlain, then the British prime minister, to sit down with Hitler in Munich in 1938.

"It isn't brave to meet in private with somebody who has insulted and denigrated" Mexicans, Mr. Krauze said. "It isn't dignified to simply have a dialogue."

Yes, many Mexicans say, it was Mr. Trump who offended the people of Mexico with his disparaging comments about migrants and his promises to build a border wall paid for by Mexico.

But for many Mexicans, the surprising invitation from Mr. Peña Nieto — who has likened Mr. Trump's language to that of Hitler and Mussolini in the past — is even worse.

President Enrique Peña Nieto this month at the National Palace in Mexico City. He has been criticized for setting up a meeting with Donald J. Trump, the Republican presidential nominee. REUTERS

WATCH: Mexico's Pena Nieto says Trump meeting was to get to know each other, expects to meet with Clinton soon pic.twitter.com/e1fwv1ZcJH

Most confusing part of Trump's speech was the "Western hemisphere" part. He wants a U.S./Mexico alliance against Chinese job-stealing?