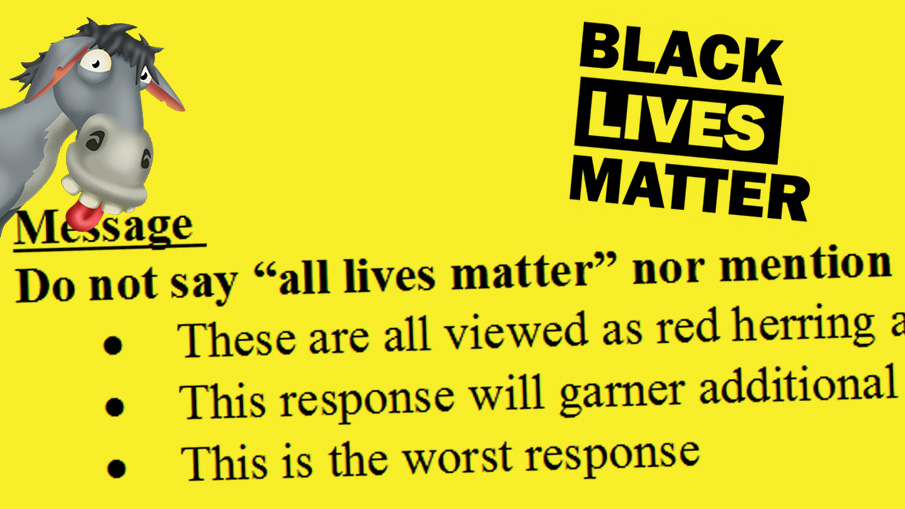 An internal memo from a key Democratic Party electioneering group tells candidates to listen but “don’t offer support” for the “concrete policy positions” of Black Lives Matter protesters—and offers tips on getting past it. Whatever you do, don't say all lives matter! "This is the worst response," the memo warns.

The 2015 memo was allegedly swiped by hackers supporting Russian efforts to influence election season in America.

“Presidential candidates have struggled to respond to tactics of the Black Lives Matter movement,” reads the memo, sent by a Democratic Congressional Campaign Committee staffer in November. “While there has been little engagement with House candidates, candidates and campaign staff should be prepared. This document should not be emailed or handed to anyone outside of the building. Please only give campaign staff these best practices in meetings or over the phone.” ...

If approached by BLM activists, campaign staff should offer to meet with local activists,” the memo reads. “Invited BLM attendees should be limited. Please aim for personal or small group meetings.”

“Listen to their concerns,” it continues. “Don’t offer support for concrete policy positions.”

The memo includes advice on what, exactly, to say to Black Lives Matter activists. It recommends avoiding phrases like “all lives matter” and warns not to bring up “black on black crime,” since the “response will garner additional media scrutiny and only anger BLM activists.”

We are disappointed at the DCCC’s placating response to our demand to value all Black life. Black communities deserve to be heard, not handled. People are dying.

Whether Republican, Democrat or otherwise, our elected officials have an ethical and democratic responsibility to make legislation that reflects the needs of their constituents. That includes Black people facing life-threatening challenges because of racist, failed policies.

We demand, and are fighting every day for, a radical transformation of American democracy where all Black lives are valued. We expect that our elected officials will stop pacifying and take us seriously.

We encourage all policymakers and elected officials to read the Movement for Black Lives policy platform and commit to legislation in the first 100 days that ensures that #BlackLivesMatter.