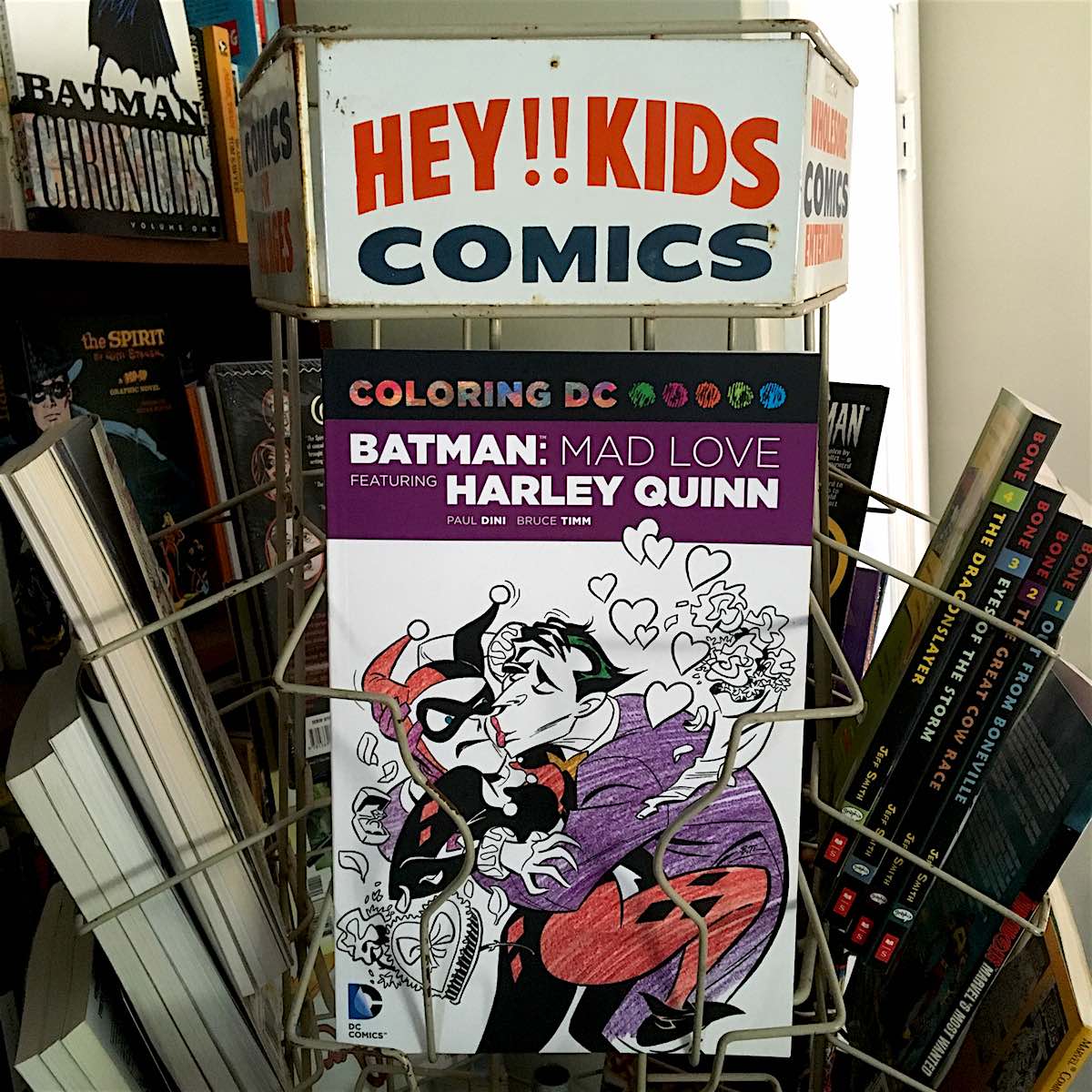 Over the past few decades the dynamic duo of legacy comic book companies, Marvel and DC, have introduced hundreds of new characters. Most have failed to catch on (sorry, Adam-X, the X-Treme!), and while recently many new characters have garnered acclaim and small cadres of devoted fans, the new Ms. Marvel and Prez have yet to become the next Wolverine.

2016 has seen two major breakthroughs that may pave the way: Marvel’s Deadpool and DC’s Harley Quinn. Both were created in the 1990s and have suddenly become the superhero equivalent of rock stars, with T-shirts and tchotchkes available at every Target and Hot Topic in America. One of them even has their own make-up line (I’ll let you guess who). My dad in his 70s now knows these characters, which I find equally amusing and eye rolling.

Which brings us to coloring books. Okay, maybe not directly, but the ascension of Harley Quinn as a character and the recent popularity of coloring books for adults has created a perfect storm, and now we have Coloring DC – Batman: Mad Love Featuring Harley Quinn, a coloring book written and drawn by her creators Paul Dini and Bruce Timm. This oversized tome contains a few extra stories of DC heroines and villians on the undercard, but the prime material is a reprinting of the terrific Harley story Mad Love.

While she was originally created for Batman: The Animated Series, no story has defined her as much as Mad Love. Her origin as both a gymnast and psychiatrist is laid out, her love for the Joker in all its complicated (and icky) glory is explained, and most importantly it showcases her as a real character. She’s not a sidekick, she’s not the Joker’s girlfriend, she’s someone who’s been searching for something and now that she thinks she’s found it she’ll do anything (and kill anyone) to get it. Oh, and there are fights and piranhas and Batman being smart and everything else you could possible want in a Batman story. There’s a reason it won the Eisner Award (the comics' equivalent of an Oscar) and is still being reprinted more than 20 years later. The story is fast-paced, funny, exciting, and disturbingly sweet. It’s the perfect Harley Quinn story and it’s fun to read.

One thing about Harley is that she can comfortably fit in a story for kids or adults, even if she sometimes sports lingerie (“It’s just her pajamas,” I told my nephew). Kids can enjoy Harley and the Joker’s antics and Batman’s heroics, while adults can read the story and understand the sadness and sickness that lies beneath it and makes the Batman world such an oddball creation. Plus with this version you get to color it!

I haven’t colored anything since I was maybe 10 so this was a new experience for me (my son is a year old and hasn’t quite developed enough Crayola patience), and I was surprised by how much I enjoyed it. Even quickly scribbling in colors made me appreciate Timm’s smooth lines and minimalist artwork. He can define body language and convey attitude with the merest of curves. No line is wasted and no line would improve it. It’s amazing work and getting to savor the panels through coloring gave me even greater appreciation for the art of comics and the talent of Bruce Timm.

Even if you’ve read this story I highly recommend experiencing it a different way. There’s no racing from speech balloon to speech balloon, no jumping through panels to get to something that caught your eye as you turned the page. You can slowly pour through the book and experience what I think is easily one of the best Batman stories (plus you’ll soon realize how incredible the work of a comic book colorist can be and how much skill it takes). There’s no escaping Harley Quinn this year, so succumb to her charms, grab a box of crayons, and test your coloring mettle against a great story. You’ll have as much fun as Harley and Mr. J blowing something up for no good reason, I guarantee it.