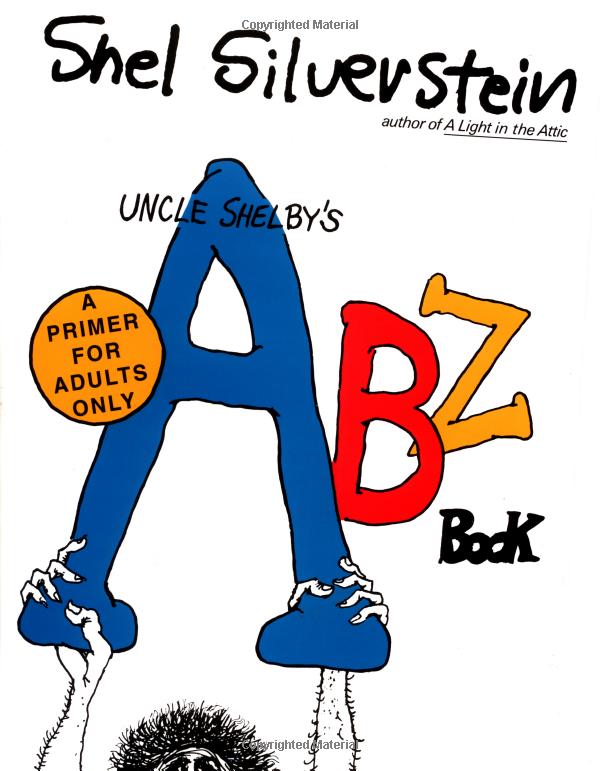 Back in 2009, I found a rare, used copy of Shel Silverstein's raunchy, hilarious not-kid's book Uncle Shelby's ABZ Book: A Primer for Adults Only, after George RR Martin told me it was uproariously funny and a don't-miss.

Since then, Touchstone has brought the book back into print, which is excellent news. Here's my 2009 review:

After this year's World Science Fiction Convention, I was sitting around the bar with some writers and editors and we got to talking about subversive kids' literature. Everyone had their favorites, but then George RR Martin proceeded to describe a book so incredibly twisted, funny and wonderfully wicked that I could scarce believe he wasn't putting me on. But George is the man who introduced me to Froggy the Gremlin from Andy's Gang (immortalized in his classic, page-turning rock-and-roll horror novel The Armageddon Rag) and so I figured he probably knew what he was about.

The book was the 1961 Uncle Shelby's ABZ Book by Shel Silverstein. Yes, that Shel Silverstein, author of many books of justly beloved poetry for children. But Uncle Shelby isn't quite for kids (indeed, recent editions bear the subtitle "A Primer for Adults Only"). No, not really for kids at all.

Because Uncle Shelby is here to teach the kids the alphabet (mostly -- his alphabet goes abzdefghijklmnopqrstuvwxyc) with a series of nasty, laugh-out-loud funny exercises and misinformative advice that nearly cost me a keyboard, as I happened to be drinking water while reading it. Some examples:

T is for TV: See the nice TV. The TV is warm... The TV loves you. Do you know that there are little elves who live inside the TV? ...If you take Daddy's hammer and break open the TV you will see the funny little elves. What will you name them?

And then there's the penultimate page: WARNING! It is not nice to burn books. It is against the law. If your Mommy or Daddy tries to burn this book, call the POLICE on them.