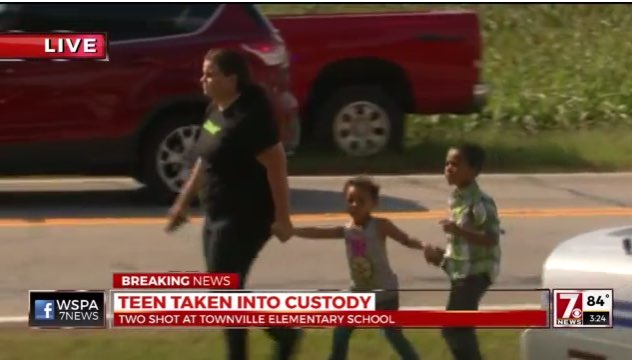 The two injured students, both 6 years old, were flown by helicopter to emergency trauma centers. The injured teacher was driven to a hospital by ambulance, police said.

A man was found dead at a home not far from the school, with gunshot wounds. He was later identified as a relative of the young shooting suspect in custody.

The Anderson County Coroner's Office is investigating a death on Osborne Road in Townville that officials said is connected with the shooting at the school. The location is a little more than 3 miles from school.

The coroner's office said a man was found dead at the home, and that he died before the shooting at the school.

Investigators confirmed that the death has a "direct connection" to the shooting at the school.

News reporters say they don't know who the teenage shooting suspect is, or how he gained access to the school, which requires visitors to be buzzed in by the front office.

Law enforcement swarmed the school building, and snipers took positions quickly on the roof of the building.

The children were evacuated to nearby Oakdale Baptist Church. The school initiated its emergency alert system, and notified parents by mass text message, among other methods.

Parents driving to pick up their traumatized children got stuck in a traffic jam along the rural road, and aerial footage showed some abandoning their cars and running down the street to the church where their children are.

On South Carolina TV news WSPA, a reporter describes the scene at that church pickup location, with families of some 290 children waiting to pick their little ones up and take them home. He begins choking up with tears.

“These are small kids. These are elementary school kids. And they were evacuated today because someone started shooting.”

Sheriffs from Anderson county and a neighboring county are present at the site of the shooting, along with South Carolina Highway Patrol, and Federal agents from ATF.

On WSPA-TV's live coverage, a father picking up his daughter says on camera, holding his child, that every elementary school teacher should be armed with a handgun.