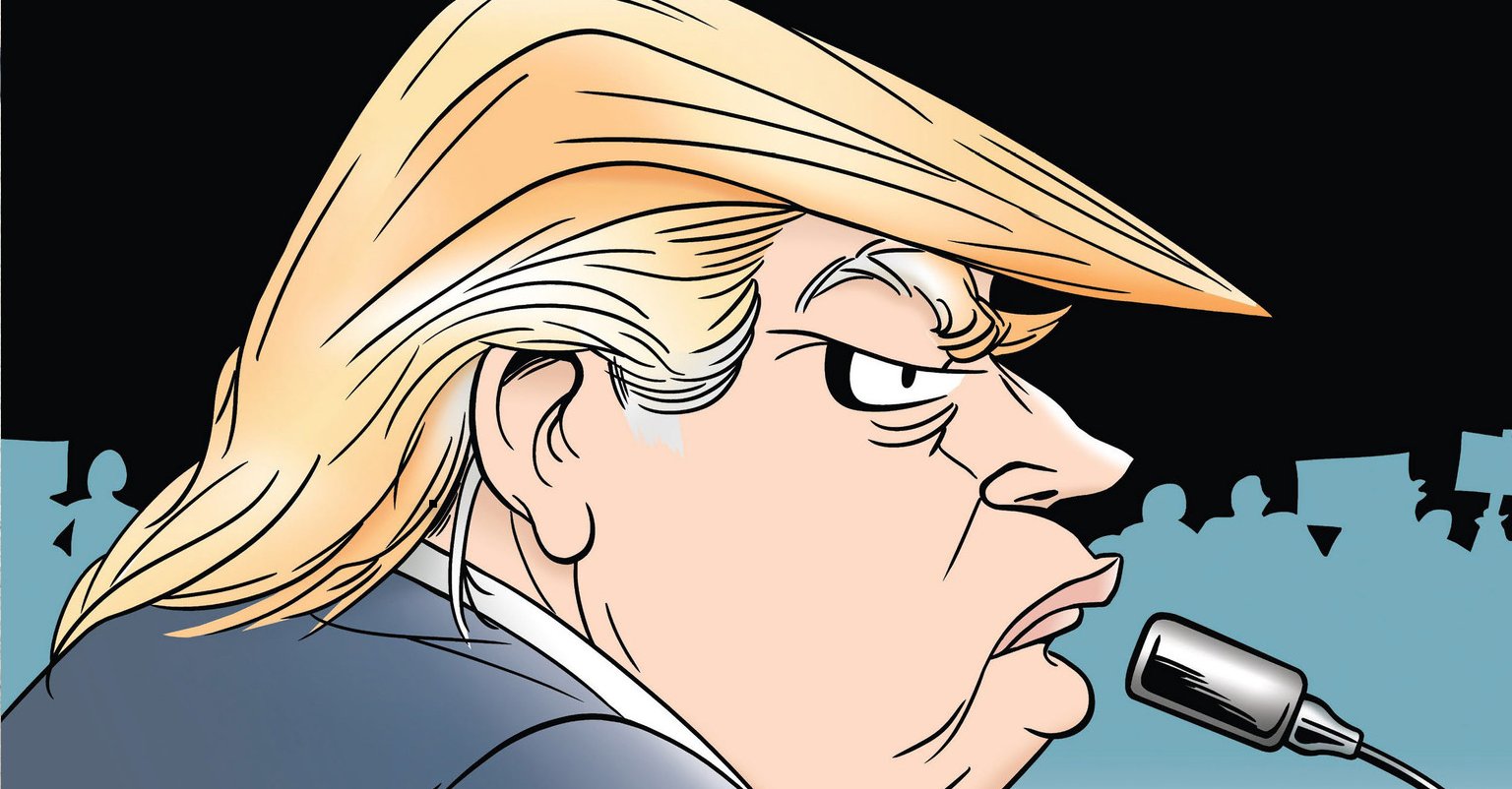 On September 14, 1987, Garry B Trudeau ran the first Doonesbury strip that mentioned Donald Trump, in which his characters marvel that New York's "loudest and most visible asshole" had floated a political trial balloon, hinting that he would run for president; thus began 30 years of marveling at, mocking, and skewering Der Drumpf, so rattling the Short-Fingered Vulgarian that he felt the need to issue a series of wounded denunciations. Now, just in time for the election, Trudeau has released a collection of his Trump-themed strips, Yuge: 30 Years of Doonesbury on Trump, just the thing to put the Republican nominee on tilt.

The first thing to know about Trudeau's Trump strips is that they're funny as hell. As Trudeau writes in his introduction, Trump is a "gift beyond imagining" to comedians (everyone knows this now, but Trudeau recognized this fact when Trump was still in larval form, still developing his ovipositors and tentacles), and Trudeau does not waste one dram of the comedic potential of the thin-skinned, self-regarding, self-unaware blowhard alleged billionaire who is now in the running to gain control of the world's largest nuclear arsenal.

That's the second thing you need to know about these strips: they're definitely in the ha-ha-only-serious realm. Trudeau has an unerring nose for Trumpian bullshit (years before the tax-return business, his characters were wryly noting that the billions Trump claimed in his net worth surely included billions for his "brand"). He spotted the Trump University scam from day one -- and mercilessly slammed it with the comic-strip equivalent of John Oliver's best Trump material -- and years before that, he was making great hay out of Trump Airlines.

After all, Trump is the man who spent millions on a luxury yacht he christened the Trump Princess, then his "fear of ocean travel kept it moored off his various failing casinos" (Trudeau gives his Hunter Thompson avatar, Duke, the job of captaining the Princess, natch). That's before you get into the comedic potential of his stupid TV show, his creepy sexual remarks about his own daughter, his string of tawdry affairs, and so on, and so on.


Every four years, Trump has postured about a presidential run, and every four years, Trudeau pricked his bubble. Now, it's up to all of us. But Trudeau hasn't abandoned us: the 2015 strips show us that Trump has physical comedy potential to meet-and-beat rubberfaced comedians like Jim Carrey -- Trudeau's pen transforms him into a medusa-coiffed low-budg Rodney Dangerfield with a wicked case of Dunning-Kruger and a shitty attitude. There have been many election-season caricatures of Trump, but Trudeau's been doing this for 30 years. He's practically the court artist of Castle Trump, and no one can beat him (not even Trump, whose capacity for self-parody can't be overstated).