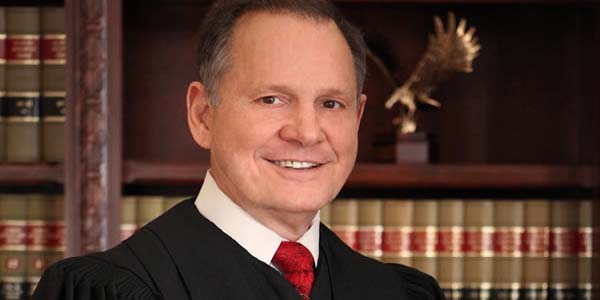 It's officially a suspension, but it lasts the rest of his term: Alabama Chief Justice Roy Moore was removed from office for gross misconduct Friday for abusing his office to try and block same-sex marriage legislation. It's his second canning; always the same old shit with Roy.

Moore’s misconduct regarding same-sex marriage litigation was sweeping and extensive. In January of 2015, a federal judge invalidated the state’s same-sex marriage ban. Moore promptly wrote letters to probate judges insisting that they remained legally prohibited from marrying gay people—in effect, demanding that they violate a federal court order. In May of that year, the judge explicitly held that probate judges must issue marriage licenses to all couples, same-sex or opposite-sex. The next month, the Supreme Court held that same-sex marriage bans violate the 14th Amendment to the United States Constitution.