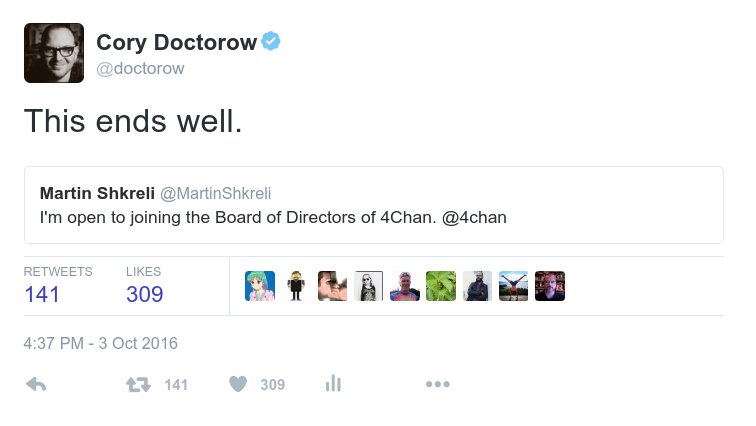 Meme factory/Anonymous birthplace/alt-right breeding ground 4chan is facing challenges similar to those plaguing all ad-supported sites, but as with all things channish, 4chan's problems have their own unique and grotesque wrinkles.

4chan founder Christopher "Moot" Poole sold the company in 2015 to take a job at Google; even then, ad rates were in steep decline. But new owner Hiroyuki Nisimura has laid out the new, harsher reality in a post entitled "Winter is coming," where he reveals that he has failed to keep 4chan "as it is" and says that in the future, he would have to close some boards, limit image sizes, and allow invasive and "malicious" ads onto the site.

As early reports of the crisis trickled out of chan-land into the non-shitlord 'net, it caught the attention of pathetic, smirking attention-whore Martin Shkreli, who apparently believes that he'll have enough of his fortune intact after paying off the fines and judgments hanging over his head as a result of his corrupt business practices -- running a Ponzi scheme with his investors' money; hiking drug prices beyond all sense or decency -- to bail out 4chan before it bottoms out.


In a tweet, Shkreli offered his services, saying he'd be "open to joining the Board of Directors of 4chan."

It looks like 4chan still has a few allies in the tech world, despite its unpleasant reputation. In a now-deleted but still-cached tweet, billionaire Minecraft founder Marcus "Notch" Persson apparently also expressed an interest in helping the site, writing: "Assuming it's not too expensive, and assuming I don't have to do any actual work myself, I'm in."

I'm open to joining the Board of Directors of 4Chan. @4chan [Martin Shkreli/Twitter]