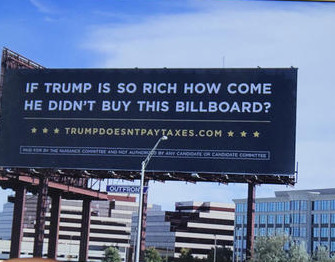 The Super-PAC is called "The Nuisance Committee," in homage to co-founder Max Temkin's grandfather, who served time in a Nazi POW camp where he founded his own nuisance committee, dedicated to monkeywrenching and irritating their Nazi captors.

The Committee's goals are to get out the vote, and to create media-friendly Trump stories that scare his opponents to the polls and dishearten and disillusion his supporters.

The other thing is the media has this insatiable thirst for Trump-related stories and trivia. Trump exploits that. He sort of arbitrages the media's unstoppable need for Trump stories by saying crazy stuff and getting millions of dollars of earned media whenever he tweets. A presidential candidate told the American public to go look at a sex tape on Twitter at 3:20 a.m. Not healthy. But meanwhile, every network is talking about Trump's tweets. I feel like we are able to exploit the media's thirst for Trump by doing these sorts of jokes. The more we can pick these provocative issues and do them in a surprising way, the more we'll get our share of the media on the other side. Turn that tactic that's been working really well for Trump against him.

IF TRUMP IS SO RICH HOW COME HE DIDN'T BUY THIS WEBSITE? [The Nuisance Committee/Cards Against Humanity]