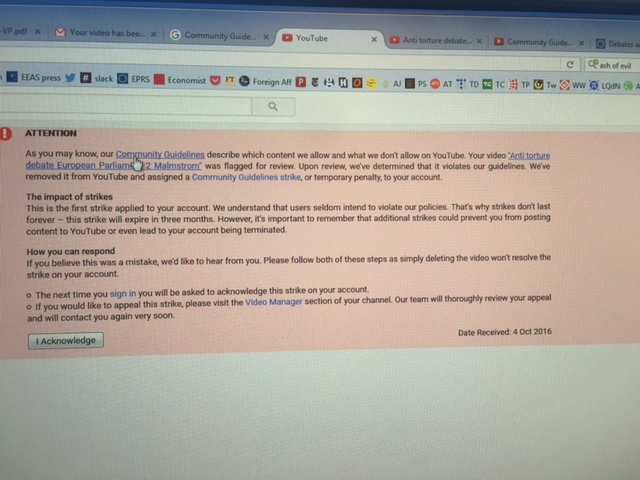 Marietje Schaake (previously) is a Dutch Member of the European Parliament who has a fantastic track-record for getting it right on issues related to technology, free speech, human rights, and privacy; she is the author of a report on export controls for spying technology used to identify dissidents to torture.

She uploaded the videos from the debate about these tools to Youtube, only to receive a notice from Youtube informing her that a video had been removed had been reviewed and found to be in violation of Youtube's standards, resulting a takedown for the video and a "strike" against Schaake's Youtube account -- enough of these strikes and she'll permanently lose access to the service.

The video that Youtube removed "included footage of European Trade Commissioner Cecila Malmstrom, who gave her opinion about the new law."

It's a bizarre takedown, especially given that Youtube claims the video had been "reviewed." The ambiguity in Youtube's "community guidelines" don't help much.


Schaake has a loud megaphone, and Google publicly apologized. But as Schaake writes, it's a perfect microcosm of the problems of so much significant, political expression being subject to the whims of a single company.