The weird history of dog-headed men 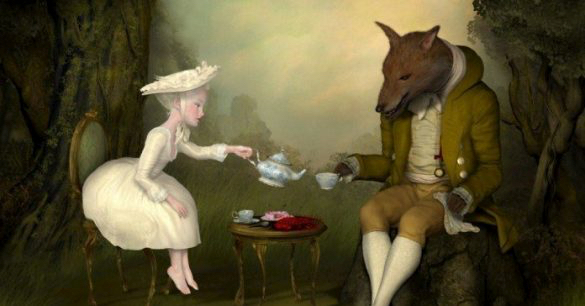 Men with the heads of dogs appear in stories going all the way back to ancient Egypt and Greece. Over at Mysterious Universe, Brent Swancer introduces us to this common character found in weird tales from around the world:

Stories of purported dog-headed men go back well into history. Mostly referred to as the Cynocephali, which derives from the ancient Greek words “cyno,” meaning dog, and “cephaly,” meaning a disease of the head, these were typically described as essentially humans with the head of a dog, and they feature heavily in stories going across cultures throughout the world, from ancient Egypt, to ancient Greek, to medieval Europe and Africa, as well as in Christian mythology....

Travelers often wrote of these mysterious dog-headed people. One Italian monk by the name of Odoric of Pordenone, who traveled about converting people between 1317 and 1330, claimed to have come across the Cynocephali at the island of Nicoveran. They were described as being somewhat brutish, but displaying a form of organized religion, worshipping oxen and wearing various gold and silver religious charms. French inquisitor Cardinal Pierre d’Ailley claimed in 1410 that there existed a race of dog-headed humans in India, as well as a one eyed variation of the creatures referred to as the Carismaspi. Explorer Giovanni da Pian del Carpine also mentions a race of dog-heads which he claimed inhabited the lands north of the Dalai-Nor (Northern Ocean), and Lake Baikal. Indeed, depictions of the Cynocephali appeared on maps of the time, similar to the dragons and other wondrous beasts that mapmakers liked to adorn their maps with. The great explorer Marco Polo even writes of the dog-headed people. While describing his travels to the island of Angamanian, he tells of a strange race of people thus:


Angamanain is a very large Island. The people are without a king and are Idolaters, and no better than wild beasts. And I assure you all the men of this Island of Angamanain have heads like dogs, and teeth and eyes likewise; in fact, in the face they are all just like big mastiff dogs! They have a quantity of spices; but they are a most cruel generation, and eat everybody that they can catch, if not of their own race.

"A Strange History of Dog-Headed Men"