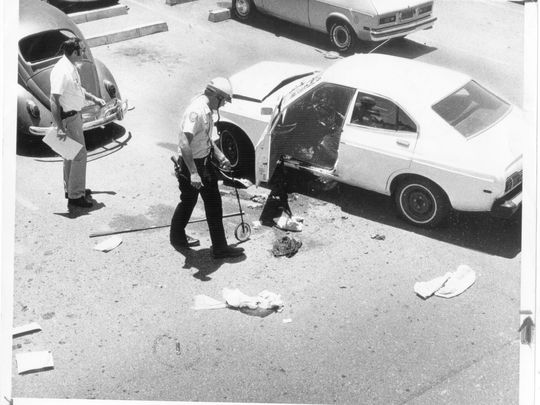 For the first time in more than 125 years, the Arizona Republic endorsed a Democrat: Hillary Clinton. Some of the paper's readers responded with death threats -- and worse. Editor Mi-Ai Parrish's response is as classy a civics lesson as you could ask for.

To those who said we should be shut down, burned down, who said they hoped we would cease to exist under a new presidential administration, I give you Nicole. She is our editor who directs the news staff, independent of our endorsements. After your threats, Nicole put on her press badge and walked with her reporters and photographers into the latest Donald Trump rally in Prescott Valley, Ariz. She stood as Trump encouraged his followers to heckle and boo and bully journalists. Then she came back to the newsroom to ensure our coverage was fair. Nicole knows free speech requires an open debate.

To those of you who have said that someone who disagrees with you deserves to be punished, I give you Phil. Our editorial page editor is a lifelong Republican, a conservative and a patriot. He was an early voice of reason, arguing calmly that Donald Trump didn't represent the values of the party he loves. Phil understands that free speech sometimes requires bravery.

To those of you who have spit on, threatened with violence, screamed at and bullied the young people going door-to-door selling subscriptions, I give you those dozens of young men and women themselves. Many sell subscriptions to work their way through school. Most were too frightened to share even their first names here. But they are still on the job. They know that free speech is part of a society that values hard work and equal opportunity.

How do we respond to threats after our endorsement? This is how
[Mi-Ai Parrish/Arizona Republic]


(Image: Investigators examine the car of Don Bolles, investigative reporter for The Arizona Republic, who died on June 13, 1976. (Photo: The Republic))