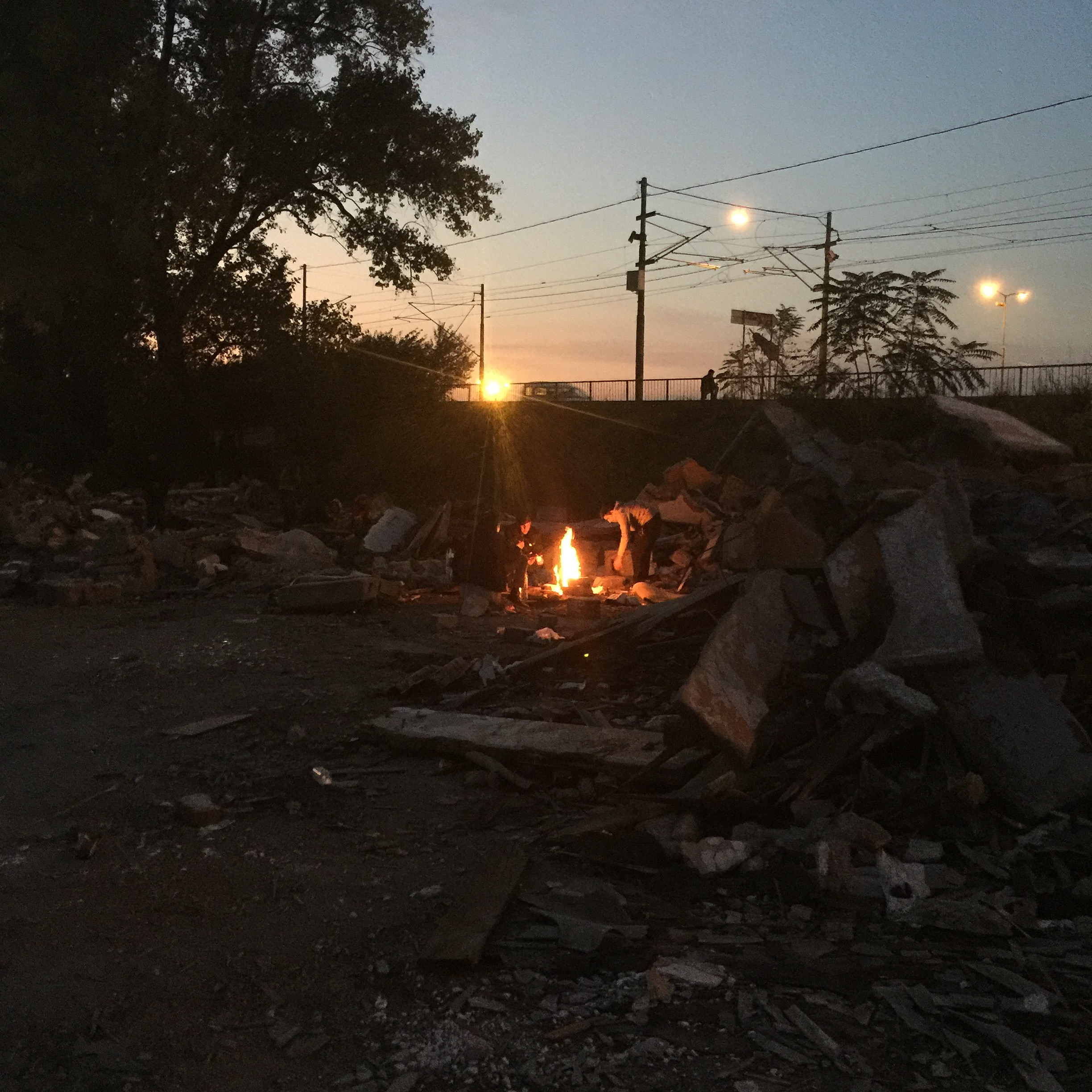 "You can’t tell who is craziest: the refugees, the police or those women," said a local shopkeeper. He made a cross over his chest, to express his sincere Serbian bewilderment.

He had just witnessed ten shabby Afghan and Syrian refugees walking past, escorted by ten Women in Black from Serbia, Italy and Spain, themselves escorted by ten policemen and a police car.

By the railway station in downtown Belgrade, the temporary citizens-from-nowhere are living their nomad existences in the the rubble of the so-called Belgrade Waterfront construction project. The refugees loiter all day, hoping for something to happen, between the city bus yards and huge trash-cans full of boxed food that the aid workers supply on a regular basis.

Around five pm there is a kind of tea ceremony where about 800 people gather, most of them arriving from the organized camps where they sleep. They arrive to be heard, to be seen. We Women in Black went to join them to show this Belgrade political scene to our international colleagues.

It’ s been now two years since the Syrian refugee crisis seized headlines, but the refugees are not entirely Syrians, but a global peoples’ market of Afghans and Nigerians as well. In the beginning there were many more refugees, and far less aid from the locals and the Serbian state. The migrants were simply collapsing on flat surfaces anywhere in Belgrade, urban nooks, parks and lots where they ate, drank and slept.

Now the bus-station square, a favorite place to cluster for obvious reasons, has been fenced and organized. The police are everywhere and a routine has been invented for the nomads. Its scope is international: border walls are being erected around Serbia, blocking the paths into Schengen Europe, where of course the refugees long to go. They come from the perilous South, the imagine safety in the West, and Balkan Serbia is only a transit zone.

I spoke to some : they are 90 percent young men. They aspire to reach France, Germany, Italy and Spain. They have addresses and phone numbers of relatives and allies in those countries, but they have no transit papers and no money.

A Nigerian young man confided me: "Money is the only real problem. If I had the money for travel, trust me: no walls or police could stop me." I believed him, because, although money cannot buy you a happy life, it can swiftly bail you out of misery, in war and in peace.

I remember how I myself smuggled chocolate into wartime Serbia from Hungary by handing cash to the customs officers. Chocolate was pure joy for Serbian children living under sanctions. The same applied to toilet paper, diesel fuel, gasoline, cigarettes, liquor...

In the nineties in Serbia, my country was being punished, but nobody thought to build walls around our national borders. On the contrary, in those heady days they built shopping malls, instant ramshackle markets that welcomed the smugglers, mostly everyday people who crossed the borders and illegally brought back suitcases stuffed with subsistence goods for a population in dire straits.

The entire economy had been de-legitimated, so we were all smugglers. The locals from countries around us made plenty of money, for their governments officially supported the sanctions while the population broke them.

Today, by historical contrast, it's Serbia is playing the warm-hearted good cop role. The former villains in the story are generously taking in the refugees, while the international community, morally pinched by the ever-growing breakdown of world-order, pays a lot of the bills. The refugees are not a novelty any more, they are escorted here and there to wherever some shred of bureaucracy or activism will take them.

The official camps were packed long ago, overcrowded with women and children, so many of the more venturesome young men end up as street vagrants, lurking under the bridges, lighting trash-fires in barrels and building makeshift showers and latrines.

I joined a Syrian group at their five o'clock tea-time. Very polite and neat brothers made us tea and poured it into genuine glasses, not plastic containers, as a sign of respect. Syrian refugees in Europe are particularly well educated, as my friend Faisa from Morocco told me: "They are the elite." Here in Serbia the Syrians are the most envied by other refugees, because they are genuine war refugees and the official recognition of their dire situation is a kind of privilege.

It follows that the Syrians sometimes get roughed up in the squats for other refugees and the Belgrade police have to intervene. I asked my tea-drinking hosts, and the other young men who gathered around me: where are your women?

They could not understand my English or Italian, but they had learned some scraps of Serbian. They all knew the word "Mamma!" Everybody’ s mamma was either back in the home country, or off in a camp. A few children were visible, but not many.

Belgrade Women in Black never come empty-handed, so they brought the useful, lightweight treats that true refugees appreciate: cigarettes and bananas. We left the covert obscurity under the bridge and began a march with some sick to the local first aid.
>
> The women activists walked in the center, the refugees gathered around them and the police escort formed an outer circle. A police car was a kind of cavalry escort. The Serbian police were the same age as the refugees, but with somewhat lighter skin color and in uniforms.
>
> I talked to the cops. "Where are the refugee women?" I asked. The chief answered me with a sly secretive smile: "You noticed that fact, madame," he said. "You are bright," he complimented me. "Because these are men fit for army service. They came here to conquer Europe, they are on a secret Muslim jihad, they left their women safe behind!"

When I asked the refugees the same question, they echoed the policeman's compliment: "You are very bright madame. Our women are at home hungry, we are here to earn money to help them. But they won't let us make a living; they keep us behind the barbed wire."

The refugees and policemen had one great point of agreement in their paranoid stories. They knew that the same people who had destroyed their nations were the ones attacking them for being transnational. They were punished for the crime of becoming victims.

I guess they blamed the big powers, those with the power to bomb them rather than their own militias and factions, but I didn't want to inquire into the details. As a woman, as an activist, I've seen enough warfare to know its situations. It doesn't take genius to see that a war-shattered society can't integrate its men and women; the genders get scattered and there aren't a lot of women around.

Wars and refugee crises are business as usual for someone, just like the situations in stark situations in barracks, prisons, and hospitals. When there is money involved, it's human trafficking; when even the money fails, then it's sheer disaster.

I have no recipe to solve a world with 60 million refugees in it, but I see more coming. The whole planet is becoming a nomad zone, for various reasons of war, oil, climate, ethnicity, religion, and everyone, especially including the most privileged, is scared that they might be next. The one percenters who own the hot investment money are perhaps the most nomadic among us, so they cannot play the geostrategic game properly any more. Their money cannot by them any security, while the refugees were ardent patriots until their burned their neighbors homes or had them blown up from above. Utopia and dystopia have the same postal code.

So who are the craziest on the street? The refugees, women or the police? A good question, and I think I know the answer, do you?

39 bodies found in a truck in Essex, England, were identified Thursday as Chinese nationals. Police have not confirmed whether they were victims of a human trafficking or human smuggling operation, but charged the driver, a 25-year-old man from Northern Ireland, with murder. The truck was found on a street at the heart of the […]